On 1 July 2020, The Kingdom of Saudi Arabia increased VAT from 5% to 15%. This decision by the Saudi government was driven by the significant economic effects of the Covid-19 pandemic. Given the impact that this policy would have on consumers and general public sentiment in the Kingdom, DataEQ carried out an analysis of sentiment towards the VAT increase in Saudi Arabia using public Twitter conversation from 1 May – 31 July 2020.

VAT conversation was negative but short-lived

Social media conversation consisted mostly of negative and neutral tweets with a Net Sentiment of -16.6% over the three months. The majority of the conversation occurred before the increase was implemented on 1 July. After implementation, negative tweets and volumes decreased significantly.

From May-June, VAT-related conversation saw a 73.2% increase. During this period, Net Sentiment decreased from -6.8% to -26.4%. However, volumes decreased after the initial post-announcement increase, decreasing by 15.5% by the end of June when Net Sentiment also returned to close to pre-announcement levels. 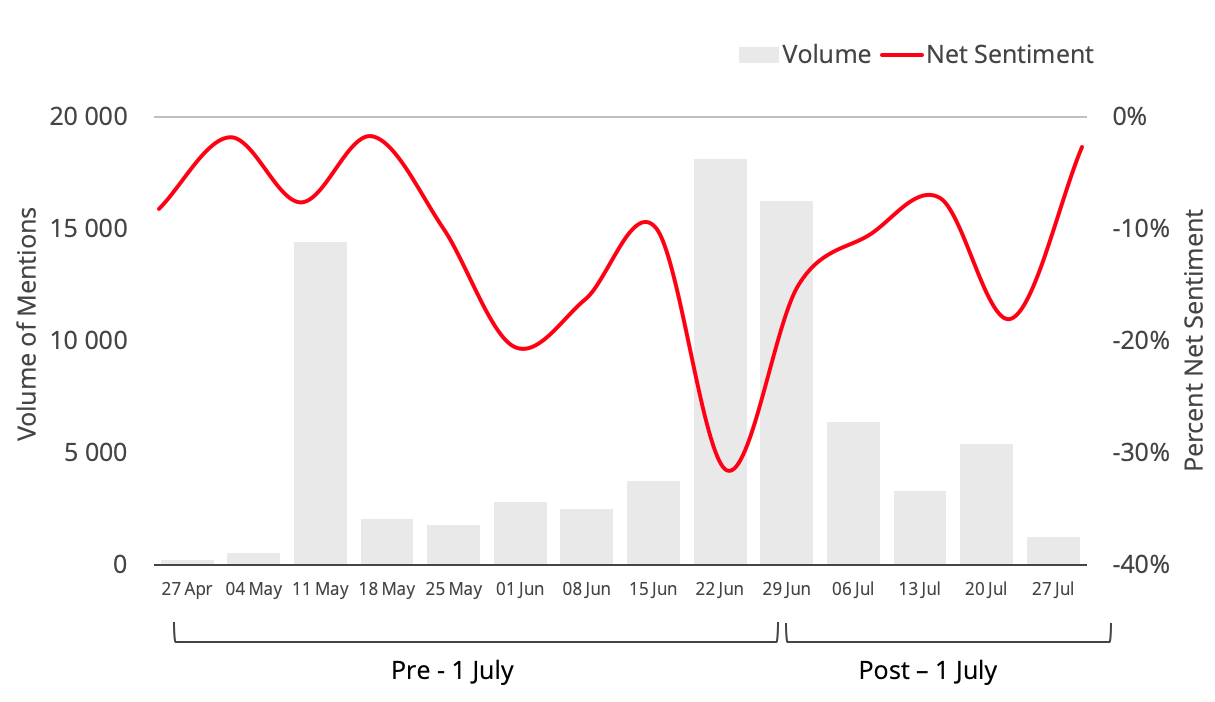 A comparison of weekly conversation volume and Net Sentiment

Before the increase, some consumers commented that the VAT increase was necessary to aid the recovery of the Saudi economy and noted the Saudi government was making this decision in the public interest.

Consumer positively engaged with businesses that announced that they would be absorbing the additional VAT instead of passing it on to consumers.

Lack of transparency was the top driver of negativity

The automotive industry had some of the highest conversation volumes

Consumers expressed concern about the impact the increase would have on the prices of vehicles and parts. Some consumers requested further information on existing orders and enquired whether prices would change. Others complained that they would not purchase a vehicle due to the uncertainty and would instead wait for pricing clarity.

Commenting on the findings, DataEQ’s EMEA Business Director, Virginia Lin said, “The quick recovery of public sentiment towards VAT in the Kingdom shows the value in listening to consumer feedback in real-time. The true impact of the VAT increase on the economy and consumption patterns is yet to be seen. However, organisations can quickly adapt their communications and pricing strategies to align with their customers’ priorities if they monitor and benchmark real-time customer behaviour and feedback across traditional digital channels”.

DataEQ carried out an analysis of sentiment towards the VAT increase in Saudi Arabia using public Twitter conversation from 1 May – 31 July 2020. The conversation about VAT was segmented through a keyword filter, and sentiment analysis was conducted using DataEQ’s Crowd. In total, 78 690 tweets were collected. 10 589 of these tweets were distributed to DataEQ’s Crowd of human verifiers for sentiment analysis. The Crowd assigned each tweet sentiment scores of positive, negative or neutral.