Metro Bank’s accounting error, cyber attack, loans blunder and subsequent fall in the share price contributed to 52% of their overall conversation. Despite being the main drivers of negative sentiment, these events did not prompt consumers to consider leaving the bank.

Poor turnaround time was the main driver of customer churn

Turnaround time complaints exceeded all other reasons for consumers threatening to leave a bank by almost 30 percentage points. 24.2% of consumers cited interactions with the call centre.

Tesco Bank had the highest proportion (6.3%) of any of the bank’s conversation. Revolut had more than consumers threatening to leave, but this made up only 2.5% of their conversation. Atom Bank had none.

Challenger banks appear to be more adept at a resolution of emotive consumer queries. Nearly 11,000 consumers (34% of all emotive conversation) complained about the time they spent with high street banks, compared to 5,000 (20.5% of emotive conversation) with challenger banks. Lengthy processes and digital downtime from high street banks is driving consumers to consider digitally astute competitors.

Superior apps a key differentiator for challenger banks. Metro bucks the trend with its branches.

23.4% of consumers who recommended a challenger bank did so based on their positive experience with a bank’s app. Monzo’s investor card, the ability to freeze a card, instantly order a replacement card, and card use abroad were differentiators for consumers. Bucking the industry trend by opening new branches, 24% of consumers recommending Metro Bank cited their branches. 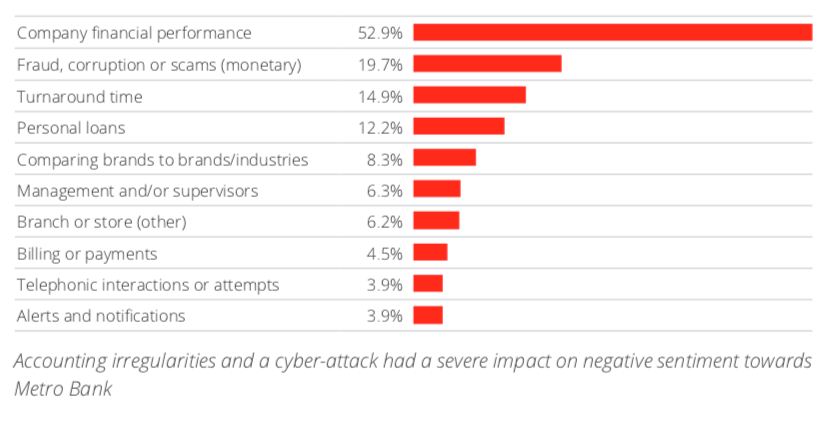 Findings present an opportunity for all retail banks

UK consumers have a growing appetite for personalised, always-on digital banking and this presents an opportunity for all banks. Commenting on the research, DataEQ chief executive, JP Kloppers, said: “In order to deliver on customer-centric products and services, that have stood the challenger banks in good stead, all financial services organisations must keep their finger on the pulse of consumer sentiment to make strategic and operational improvements across channels. To do this, they cannot afford to ignore social media as a valuable source of customer experience data.”

“Banks that capitalise on this, and continue to innovate with new streams of customer data, will build loyalty and reduce churn. Those who do not, put both their reputation and bottom line at risk” added Kloppers.

DataEQ retrieved 118 460 tweets pertaining to six UK challenger banks for the period 1 December 2018 to 28 February 2019. The banks analysed in this study were Atom Bank, Metro Bank, Monzo Bank, N26, Revolut, and Tesco Bank. All data was sourced from Twitter.

To carry out sentiment analysis with a 95% confidence level, a random sample of 23 234 of these posts was processed through DataEQ’s Crowd for evaluation and verification. Posts were assigned sentiment scores of positive, negative or neutral. In some cases, a post can be both positive and negative towards a bank.

Topic analysis enables a granular understanding of the specific reasons driving consumer sentiment. 78 banking topics were identified through a process of crowd-sourced qualitative content analysis. A sample of 14 340 sentiment-bearing posts (only positive and negative) was sent to the Crowd, who identified which of these 78 topics were contained in each post.