DataEQ assessed the consumer response to Vodacom’s 5G launch in May. As consumers flock to social media during the lockdown, DataEQ analysed consumer reaction on social media to the network’s 5G announcement. From 1 to 15 May 2020, 4 410 social mentions of Vodacom were collected, 2 505 of which were distributed to DataEQ’s Crowd of human verifiers for rating. To compare the reaction to Vodacom’s 5G launch with that of rain’s in 2019, data was collected for the data-only network from 15 to 28 September 2019. 1 913 mentions for rain were collected of 1 415 of which were distributed to DataEQ’s Crowd for rating.

Vodacom launched 5G in Johannesburg, Pretoria, and Cape Town. In 2019, rain rolled out its 5G network in Johannesburg and Pretoria. While both network providers saw similar levels of negativity following their 5G launch, rain recorded a much higher percentage of positive sentiment. When looking at Net Sentiment scores, rain outperformed Vodacom by 15 percentage points. Rain drove positive 5G conversation through its brand content, with consumers often praising the network for innovating.

Consumers commented that Vodacom’s 5G data offering was unaffordable. Some believed rain’s 5G plans were more affordable and preferred them for being uncapped and available on a month-to-month basis.

The 5G launch prompted a number of complaints. Complaints around vanishing data were compounded by the 5G launch as some became worried the issue would be exacerbated by the new 5G network. Consumers also complained that Vodacom should focus on improving and extending its existing network quality, particularly 4G, before moving on to 5G. Some consumers raised concerns about the health and environmental impact of 5G and some spread conspiracy theories that the technology was linked to COVID-19 infections.

DataEQ applied its four priority tags to the mentions that fell into one or more of the Risk, Purchase, Cancel or Service categories. Service mentions made up the bulk of priority 5G mentions. This category was largely driven by current Vodacom customers discussing data prices and 4G coverage, and rain users providing feedback on the competitor’s 5G offering.

Vodacom’s 5G launch drove close to six times more risk than purchase interest from consumers. Risk conversation largely consisted of safety concerns around the effects of 5G on human health and the environment, with some threatening to boycott Vodacom. Accusations of unethical behaviour were also common among 5G risk conversation as consumers believed Vodacom’s 5G offering and pricing were another way to take advantage of its customers. 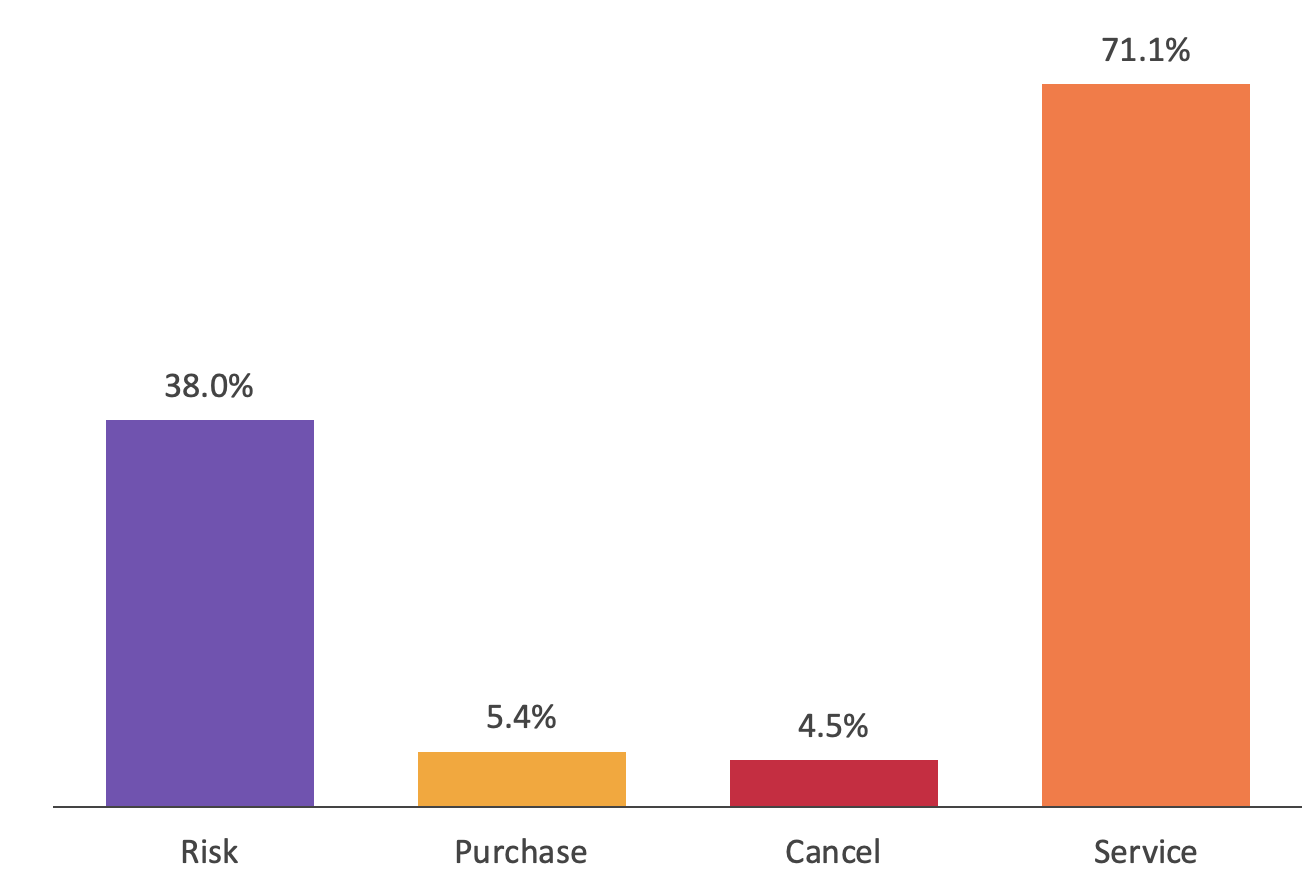 Contribution of each priority interaction category to overall priority 5G–related conversation for Vodacom.