UK consumers are concerned about incurring expensive roaming charges after Brexit and some consumers have threatened to switch telecom providers, according to new customer experience research by DataEQ.

Consumer concern was triggered after Vodafone said it would not rule out implementing roaming charges after Brexit. Consumers responded favourably to Three’s confirmation that their customers would not incur new roaming charges. The findings form part of a wider piece of customer experience research into UK telecom providers conducted by DataEQ.

DataEQ will publish its first UK Telecom Sentiment Index in July. The research analyses some 194 000 public tweets about EE, O2, Three and Vodafone from 1 February 2019 to 30 April 2019. The research, which relies on DataEQ’s combination of AI and crowdsourcing, assesses customer service feedback, churn potential, and risks facing the industry. The research uses DataEQ’s technology to separate the PR & marketing feedback from key operational data pertaining to customer experience.

Vodafone had the highest share of consumer conversation over the research period. This was driven in part by consumer engagement with their giveaways as well as criticism about the lack of clarity about future roaming charges.

Three, on the other hand, made it clear to consumers that there would be no additional cost to roaming after Brexit. 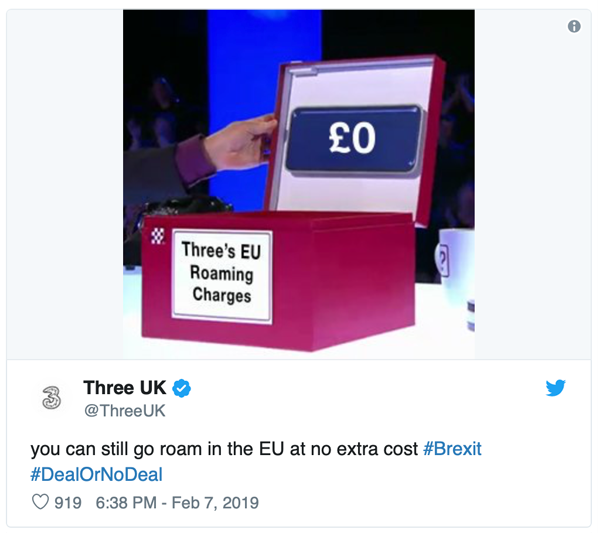 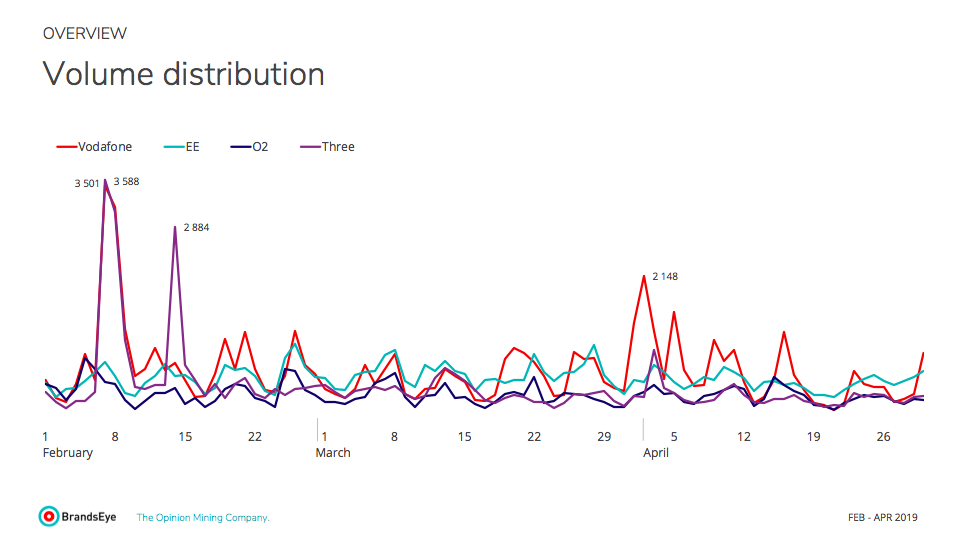 On 7 and 8 February, 82% of Three’s conversation and 82% of Vodafone’s conversation related to engagement with a tweet by journalist and former politician Suzanne Evans. Evans, a former deputy chair of UKIP, criticised Vodafone, her then-current service provider, for considering charging for roaming within the EU after Brexit. Evans, who noted Three’s decision to rule out the introduction of roaming charges, received much criticism for being a Brexit campaigner.

In conversation relating to telecom providers and Brexit, consumer sentiment towards Three was nearly 50% positive. Their commitment to no roaming charges was also one of their main sources of acquisition opportunities. 33% of Vodafone’s conversation was negative as customers of the network demanded clarity on the possibility of roaming charges. 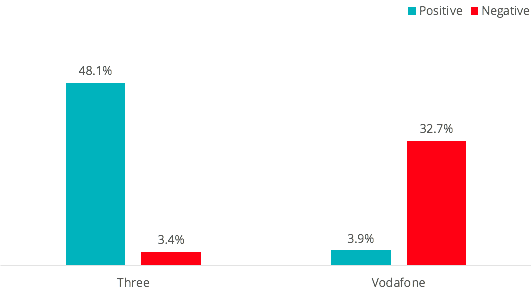 Sentiment towards Three and Vodafone where Brexit was mentioned

New post-Brexit roaming charges pose risks to providers, as regular British travellers have indicated they would change telecom providers to find one that has preferential or no roaming rates.

To carry out sentiment analysis with a 95% confidence level and an overall 0.8% margin of error, a random sample of 33 349 of these mentions were processed through DataEQ’s Crowd contributors for evaluation and verification. Tweets were assigned sentiment scores of positive, negative or neutral.