Clinton wins the debate but not the war

Social media points to a moderate Clinton surge – but it’s by no means decisive.

American presidential debates have very little to do with policy and debate – they are about who wins the narrative – be it by body language, demeanour, or a single hard-hitting ‘zinger’ aimed at the opposition’s fatal flaw.

Hillary Clinton – by means of a calm demeanour and a string of solid attacks on Trump –clearly won the narrative of Monday evening’s debate. DataEQ’s social media analytics shows– in real time during the debate – a victory, nationally, for Clinton.

But the social media data also shows that this will not be a decisive victory for Clinton – the numbers and structure of the race point to a long, hard slog toward the November finish line.

Sentiment towards Clinton and Trump after debate

This tallied into a solid boost for her overall social media advantage for the day, in which she extended her total positive sentiment lead for the week by close to 15% - opening up a lead of 17% as compared to just over 3% for the week leading up to the debate: 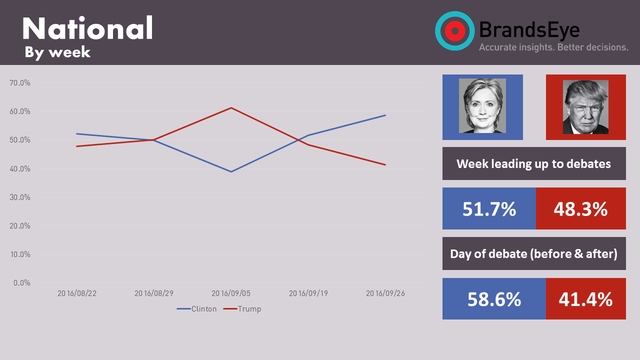 Sentiment towards Clinton and Trump Nationally

Normally, this would probably represent something of a knock-out punch in an election, especially against such a widely disliked candidate as Trump is. In fact, most of the international media have been reporting the debate in these very terms.

But this is not a normal election – because Clinton is almost as widely disliked nationally as Trump is. In the list of least popular presidential candidates of all time, she is second only to her competitor.

This negativity has the effect of almost cushioning the crushing rhetorical defeat suffered by Trump – who himself recorded vastly more negative mentions than positive mentions the entire night, but still benefits from Clinton’s own negative sentiment.

Before the debate, Hillary bemoaned the fact that she could not understand why she was not up by 50% in the polls – here’s her answer. She has a likeability problem which means she is battling to absorb US citizens repelled by Trump.

In short, a rampant Clinton victory in the first debate has not altered the six fundamentals of this election; and these fundamentals all point to a very tight race in November – edging towards Clinton – but seemingly unable to be decisively tilted towards her even after a crushing debate victory.

Sentiment towards Clinton and Trump in North Carolina 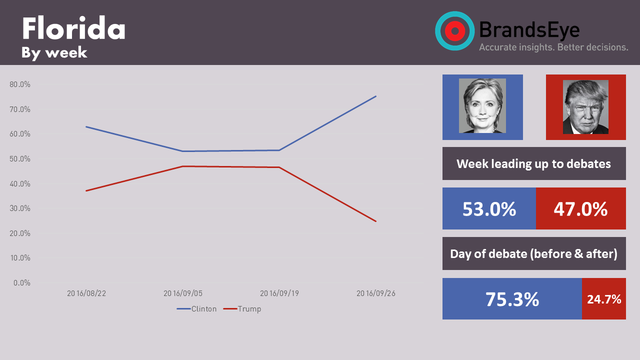 Sentiment towards Clinton and Trump in Florida 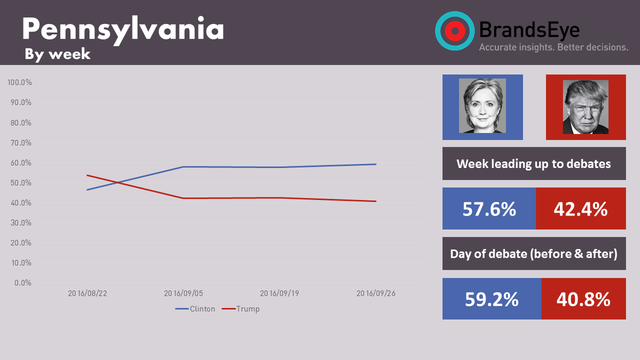 Sentiment towards Clinton and Trump in Pennsylvania

But there is a twist here - Pennsylvania is a highly diverse state politically. Legendary Bill Clinton politico, James Carville, famously described the state as Pittsburgh on one side, Philadelphia on the other, and Alabama in between. The non-urban counties are coal and old industrial country. These are the people who Obama said cling to guns and religion in the midst of economic hardship.

Trump’s anti-trade and immigration rhetoric is made for these people. Clinton should be wary of one vital statistic that could push Trump to an upset in a state like Pennsylvania: in 2012, 24 million white men without college degrees (the demographic most favourable to Trump) did not bother to vote – and Obama only won the popular vote by 5 million. The fact that Trump is holding on in the social media data in this state should be very concerning for Clinton.

What is ultimately clear is that this is not a normal election that can be analysed merely by traditional polling and thinking. Trump’s gaffes just don’t hurt him as it would a normal candidate. In a strange way, it almost helps to craft his anti-establishment persona. Meanwhile, Clinton just can’t put Trump away – her support is seemingly weighed down by her low favourability numbers.

Analysts are going to have to closely watch all the data emerging from the key states of Florida and Pennsylvania in order to understand and stay ahead of the curve of what is shaping to be one of the most important and fascinating political spectacles of our generation.