How the Zimbabwean public viewed the military coup


In analysing the unfolding political crisis in Zimbabwe, DataEQ has looked at the views expressed by Zimbabweans on social media from 9 to 16 November 2017. This date includes the dismissal of Vice President Emmerson Mnangagwa, which is widely recognised as a catalyst for the military intervention. DataEQ analysed 28 737 social media mentions from 4 012 authors who identified their location as Zimbabwe.

How have Zimbabweans viewed the military intervention and coup in general?

There has been quite a muted response to the intervention by Zimbabwean security forces and the coup in general. Zimbabweans have been largely neutral. However, the net sentiment expressed towards the coup has been positive at 8.7%. Zimbabweans praised the peaceful nature of the unfolding events. Humour was also featured in the mentions that were positive towards the coup. 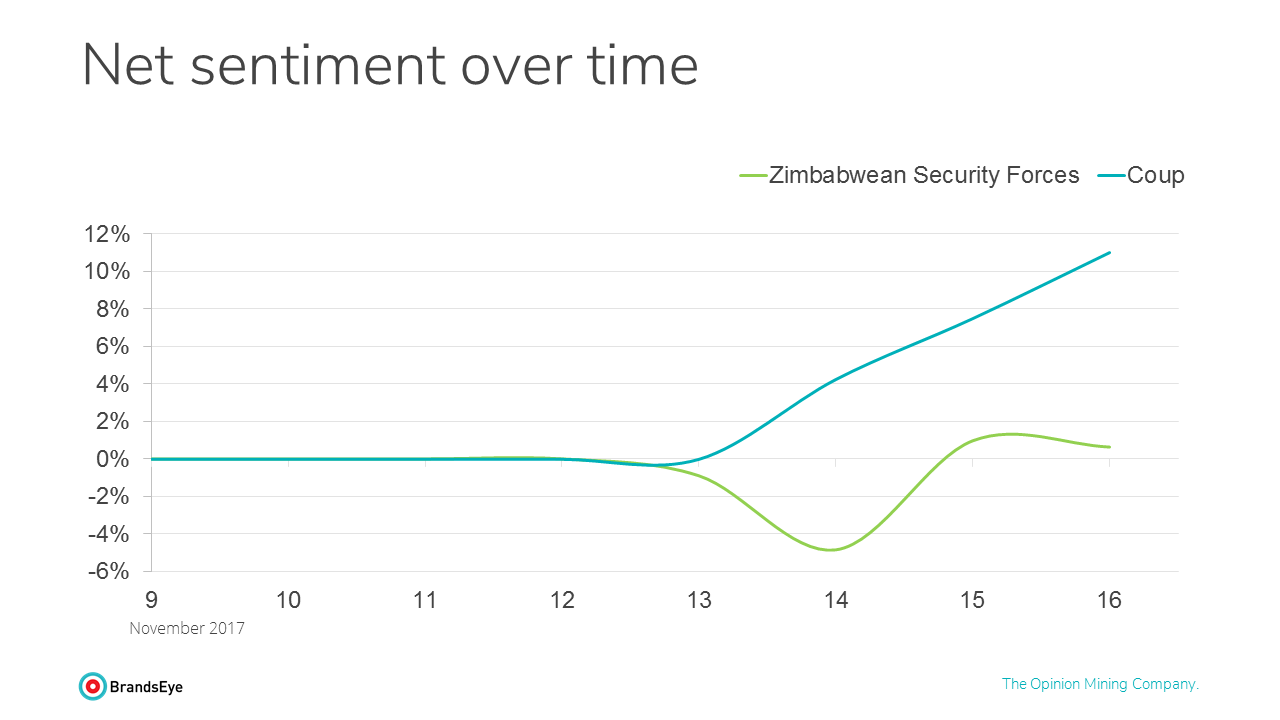 Our coup is more peaceful than elections. @Wamagaisa can't you ammend the constitution so that we can have a coup every 5 years

Sentiment towards the security forces in Zimbabwe has been slightly more negative than the coup in general (net sentiment is -0.4%). On 14 November, there was a significant decline in net sentiment after some citizens questioned the validity of a transition driven by the military. This was exacerbated by a sense that ZANU-PF factionalism was being played out through the Zimbabwean Defence Forces.

We don't need the military to intervene. We don't need a tired party riven by factionalism to save us. We just want our chance to create our new Zimbabwe ourselves. Free, Fair & Just. #MyNewZimbabwe #Chiwenga #twimbos

Both Robert and Grace Mugabe have strongly negative net sentiment at -33% and -24.9% respectively. Grace Mugabe saw a spike in positive sentiment on 12 November due to her endorsement from ZANU-PF Youth League for the position of Vice President. After Mnangagwa’s removal, it was also perceived that she had cleared her way of political opponents. Naturally, their fates are closely aligned, and we see that their net sentiment co-varies. 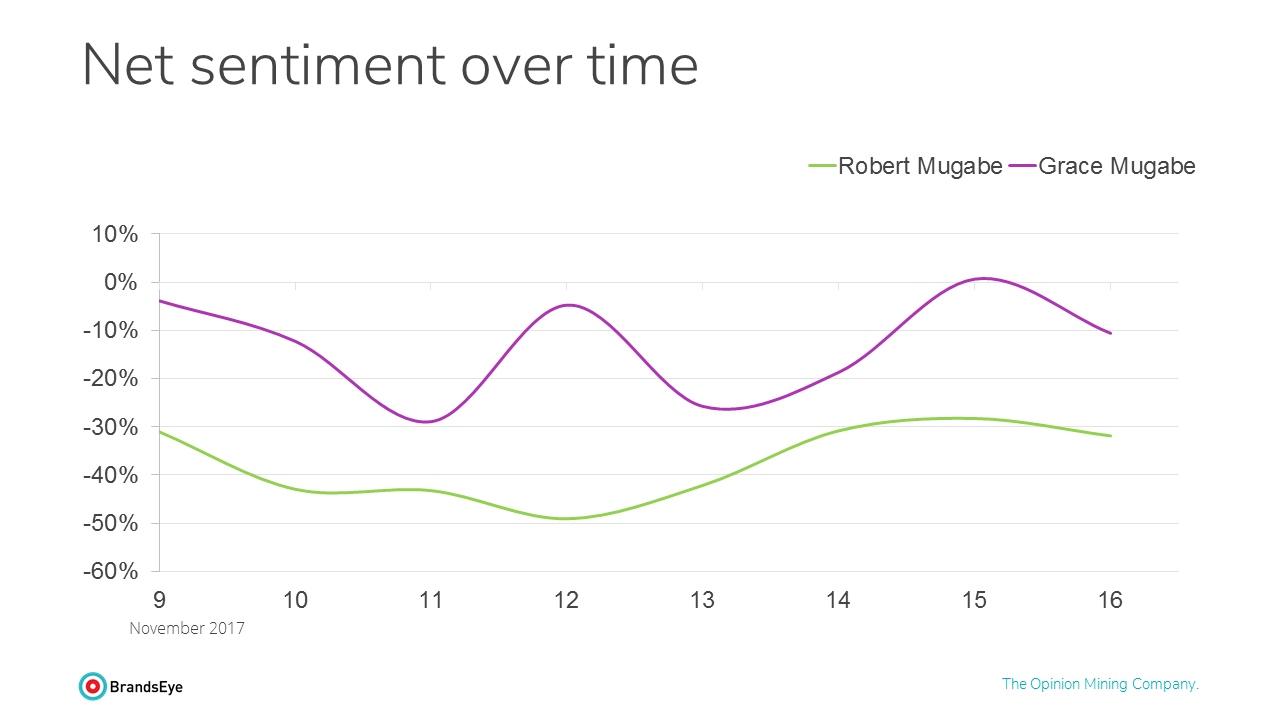 Public sentiment towards Mnangagwa has been significantly more negative than towards Chiwenga. Some of the allegations that Mugabe had lodged against Mnangagwa may have resonated with some Zimbabweans. Other citizens simply cited Mnangagwa’s political record as the reason that he was not a suitable alternative. Chiwenga saw an increase in negative sentiment on 14 November following allegations of treason from ZANU-PF party members. 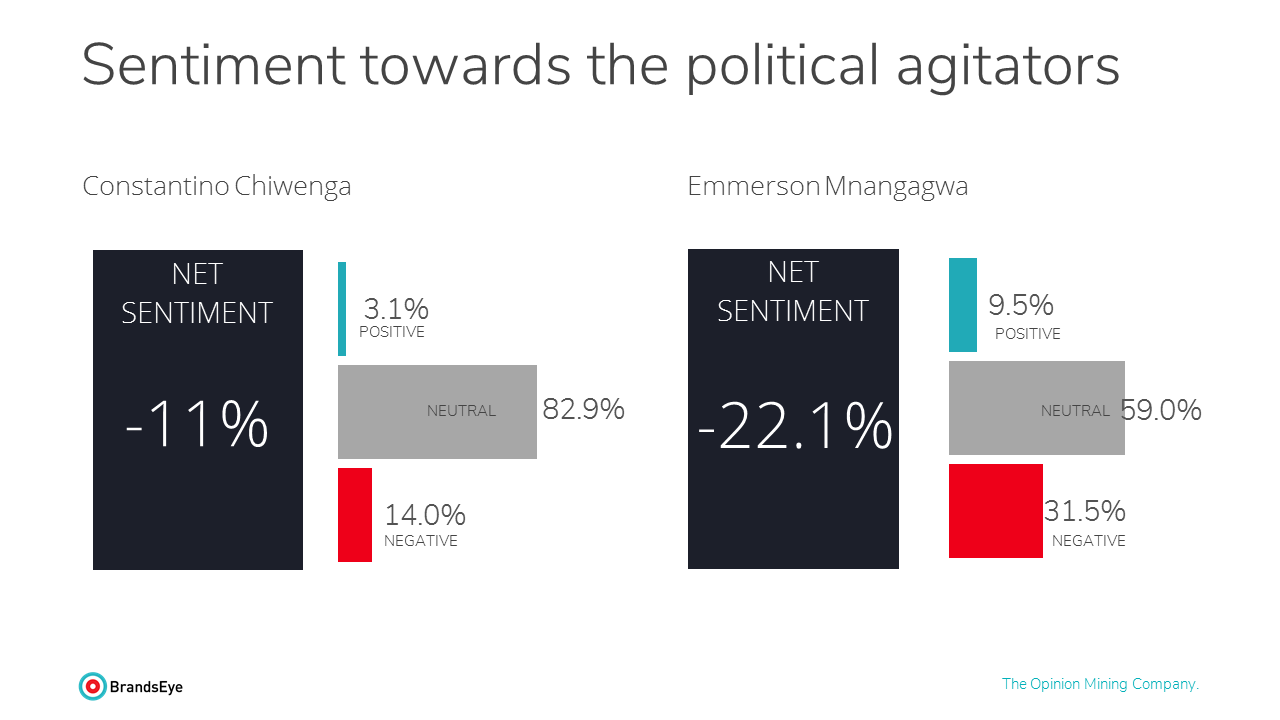 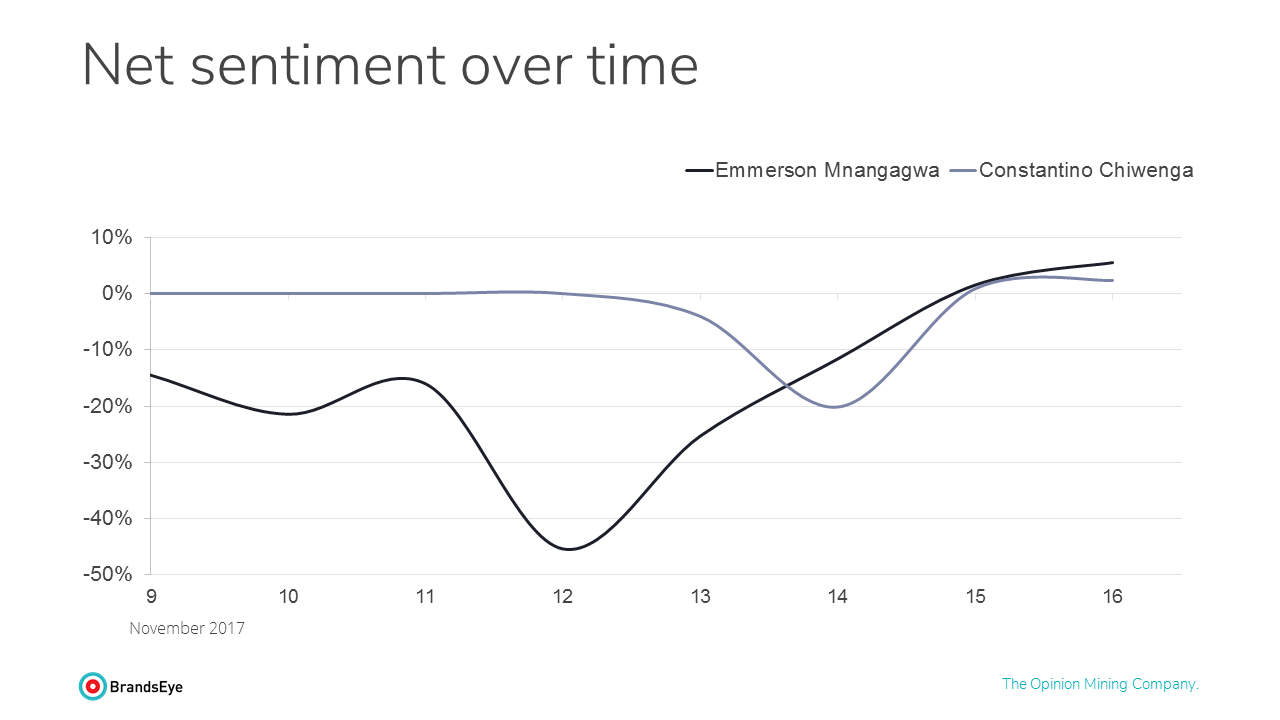