Why banks should tailor services to specific needs

More and more people are using their mobile phones to do their everyday banking. In the United Arab Emirates (UAE) with internet penetration at 92 percent, approximately 80 percent of consumers prefer to do some part of their banking on their smartphones, computers and tablets.[1] It is not surprising then that many UAE banking customers also use social media to compliment and complain about their banks. 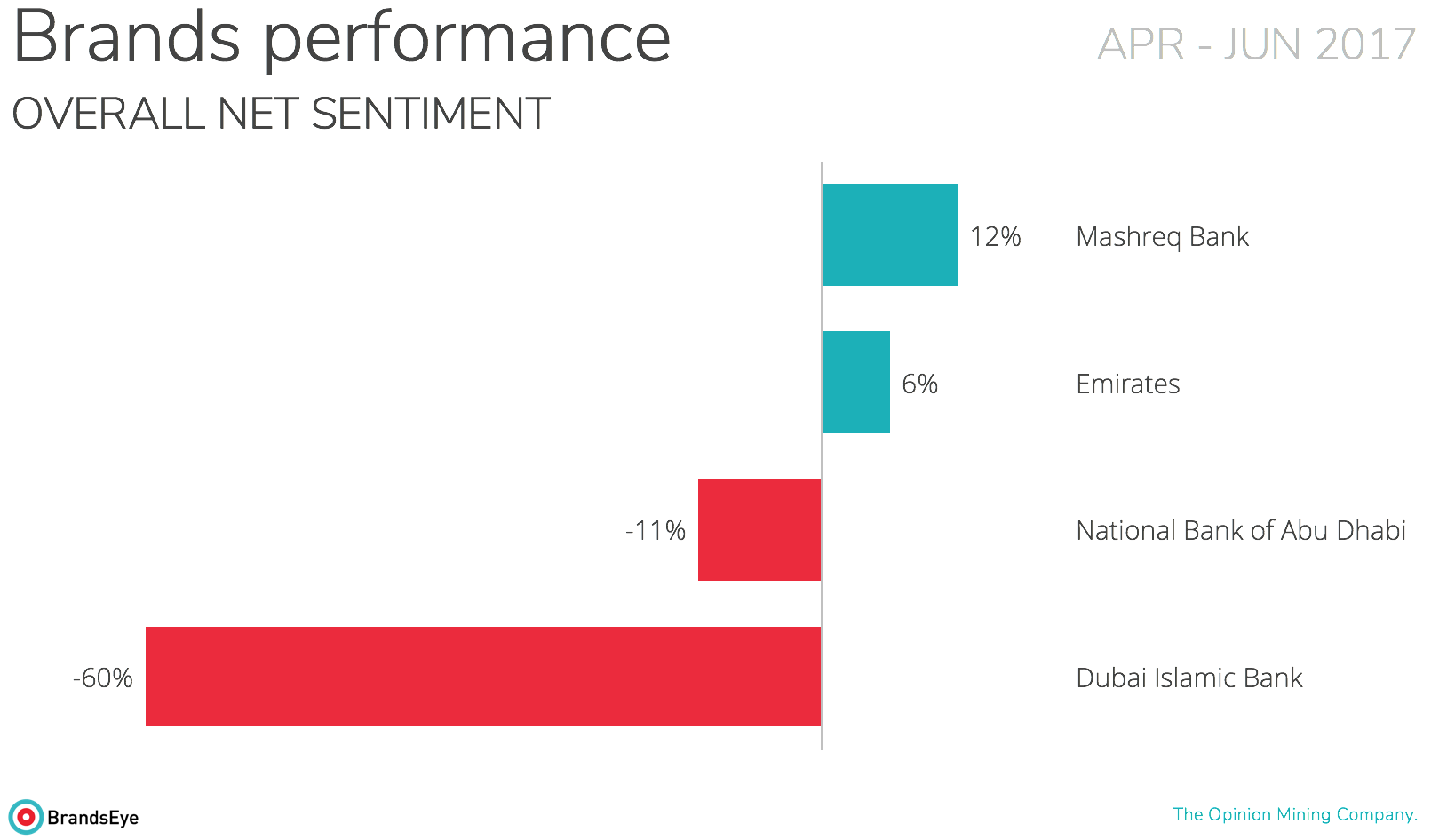 Mashreq bank placed first in the study based on net sentiment, but also received the least number of mentions with 4 202. Their positive sentiment was mainly driven by a visit in May from the His Highness Sheikh Mohammed where he congratulated the bank on its 50th anniversary. The bank also received positive engagement from its customers when it was named the best contact centre in Europe, Middle East and Africa.

With the highest conversation volumes, Emirates NBD was mentioned 17 778 times over the reporting period. It was also the only bank to maintain a positive net sentiment for all months of the study with its net sentiment remaining above 5%.

Dubai Islamic Bank were ranked the lowest by net sentiment. The main driver of negative sentiment related to the fraudulent accusations surrounding the Takaful insurance offering. Customers accused the bank of scamming and deceiving them by selling them life insurance when they thought they were opening an investment account. Consumers threatened to leave and join another bank if they were not reimbursed.

For all banks analysed, long waiting times or customer queries that went not responded to led customers to post their grievances on social media.

In November 2016, Emirates NBD launched their Virtual assistant, EVA. The product received criticism from customers who preferred to deal directly with human staff members rather than the virtual assistant.

Furthermore, other fintech tools such as online and mobile applications received mixed responses. It appears that UAE citizens still prefer to interact with banks via traditional face to face interactions.

As a global business hub, the UAE is home to many different cultures and languages. Though Arabic is the official language, English is widely spoken by the majority expatriate community. Our study revealed different priorities for Arabic and English-speaking banking customers.

For Arabic-speaking customers, ethical issues were of primary concern. For this topic, we included the analysis of posts relating to fraud and the banks’ perceived trustworthiness.

For English-speaking consumers, customer service was the primary concern. This pertained to the attitude of bank staff and the time the bank took to process their requests.

On the topic of banking staff, Arabic-speaking customers cited foreign nationals’ cultural differences, such as accents and language as the primary reason for staff complaints. For English speaking expats, staff complaints related primarily to customer service.

As retail banks focus on innovation and fintech spending, they must take care not to neglect the very basic needs of their customers. By mining social media to gauge public sentiment, banks are able to get an accurate understanding of their customers’ primary needs and concerns. This is particularly crucial for a country with such a diversity of cultural priorities and expectations as the UAE.