The United States has begun to vote on the decision that will determine their next four years - while the election looms large - many states have already initiated early voting.

The earliest of these was Minnesota and South Dakota who began early voting on 23 September.

With early voting increasing steadily over the past 20 years, this represents a large portion of the voting populace. Though notably, different demographics show different voting behaviours, so this is not necessarily representative.

Trump’s rhetoric throughout the campaign has been that ‘the system is rigged” - a key message also promulgated by his followers. Although Trump uses this phrase to broadly describe the entire social, political, and economic sphere, we’ve shown that his supporters are far more concerned that elections are being rigged.

Together with the political risk consulting company, S-RM, we reported on the dominance of conversations around the rigged system, showing that 4% of all people talking about the US elections were concerned with the rigged system.

Concern with the trustworthiness of the US elections extends to current reports of voter fraud. Analysis from 6 June - 7 November 2016 has revealed that there were just over 18 00 people discussing voter fraud - this translates into 0.5% of all people taking part in discussions about the U.S. elections over this period.

Actual recorded cases of voter fraud remain extremely rare compared to the vehement outcry from civil groups. As Vox notes, between 2000 and 2012 there were only 35 credible in-person voter fraud cases out of more than 830 million votes cast.

Nevertheless, social media is naturally used as a bugle to amplify these objections. There has been an exponential increase in conversations around voter fraud - particularly since most states started early voting. 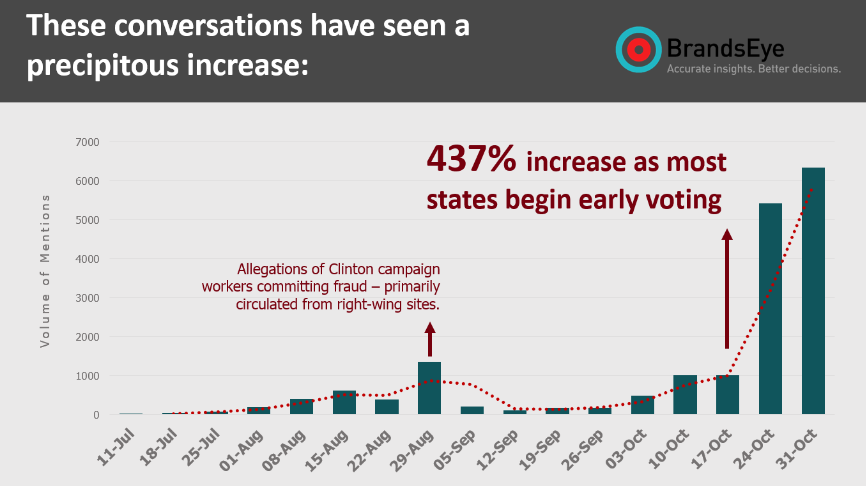 Birds of a political feather?

In order to delve into the sources of discussions around voter fraud we looked at the sites most often used to justify cases of voter fraud. The most circulated web links on social media were from the conservative (and often sensationalist) site Truthfeed.com. While articles from fairly balanced news sources like The Guardian and The Washington Post emerged as second and third - the rest of the list was made up largely of sites that sit somewhere on the conservative political spectrum. These included the hard-right-leaning sites like TheGatewayPundit.com and SlienceIsConsent.com as well as Breitbart.

When excluding social media sources we found that most mentions came from similarly right-leaning pages. These included the conspiracy theory site, GodLikeProductions.com and the conservative internnet forum, FreeRupublic.com.

We also analysed the most engaging authors on social media. As with the above-cited report on the rigged system, we similarly found that authors who garnered the most engagement in the conversations around voter fraud were overwhelmingly Trump supporters. 46% of these were self-described Trump supporters, while a further 13% referred to themselves as conservatives.

Analysing voter fraud protestations on a state-level imitates the kinds of battleground contestations we’re seeing in early voting and polls. 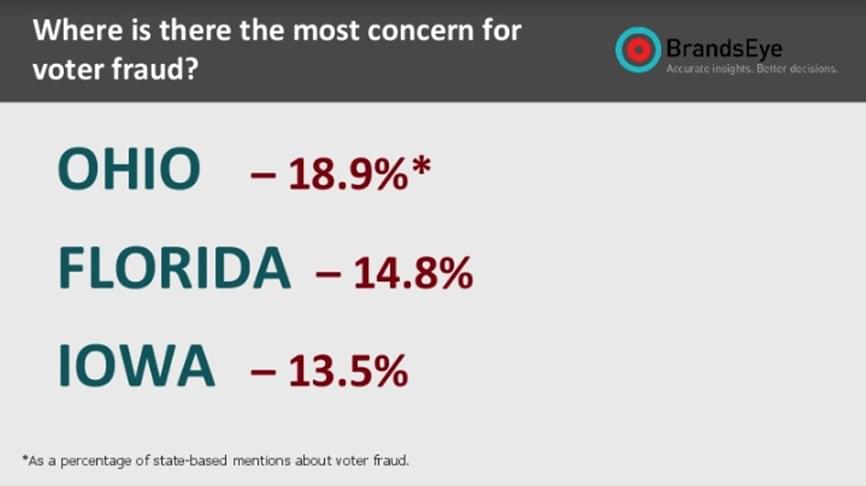 Obviously, it is apparent there appears to be strong evidence that this topic is primarily driven by Trump supporters. The more worrying assertion is that this group of authors sustains the conversation in a self-validating political echo-chamber.

How does this bode ahead of voting day?

Whether or not the instances are in fact true is obviously an important matter to the validity of the U.S. electoral mission. It also points to the extreme influence social media has had in driving the narratives around this election. Particularly those hyperpartisan profiles that Buzzfeed News analysed.

Regardless, conversations like these sustain the perception that the integrity of the voting system and as we’ve seen time and time again - so much of this election has been based on perception rather than fact.