Best and worst SA network providers according to customers


In a tumultuous year for the South African telecommunications sector, 2020 saw network providers grapple with calls for data price cuts in the face of a pandemic-driven demand for connectivity and digital customer service. From the perspective of consumers, however, the performance of local telcos has left much to be desired.

This is according to the results of DataEQ’s latest South African Telco Sentiment Index, conducted in partnership with Deloitte Africa. The study, which analysed consumer social media conversations directed at the country’s major telecommunication providers, revealed that South Africans were notably more negative towards telcos than banks, insurers or retailers in 2020.

That said, having tracked over two million social media posts about Cell C, MTN, rain, Telkom, and Vodacom throughout the year, the index found that some telcos received significantly more negativity on social media platforms than others. Each post received a sentiment rating – positive, neural, or negative – which was used to calculate a Net Sentiment ranking for each telco. 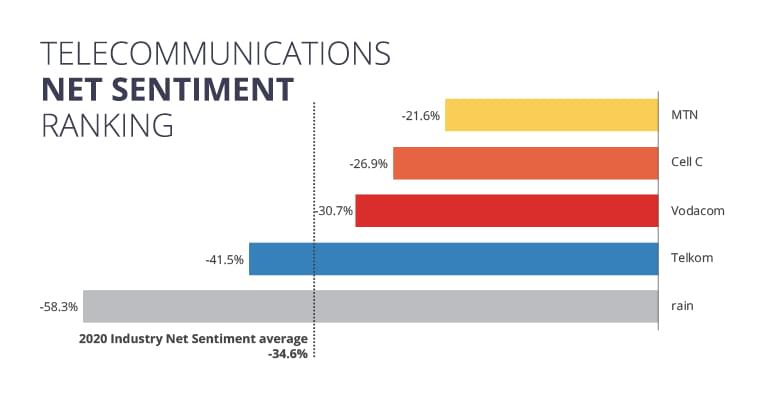 Newcomer rain ranked last, scoring over 20 percentage points below the industry average. On the other end of the spectrum, having scored the lowest negative sentiment and highest positive sentiment, MTN ranked first. Unexpectedly, Cell C – whose survival came into question during 2020 – placed second, while Telkom placed second-last despite seeing the most annual customer growth.

It was in network conversation that MTN shone. While seeing only a small advantage in quality, it was speed and coverage with which consumers were most satisfied. rain on the other hand, saw above-industry levels of risk conversation about downtime, evidencing network quality as one of its major weaknesses. In terms of load shedding conversation, both MTN and Cell C saw a considerably better Net Sentiment than the other telcos, suggesting their users were the least affected by power outages.

Pricing complaints followed a downward trend across the industry in 2020, largely driven by the data price cuts implemented following the Competition Commission’s inquiry. However, despite slashing data prices by up to 40%, Vodacom still saw the most negativity around pricing. Cell C recorded the highest positive and least negative pricing sentiment, ranking them first in this regard.

Customer service emerged as the area that most negatively impacted sentiment towards telcos in 2020. Unsurprisingly, service complaints saw a steep increase a month into lockdown and remained consistently above pre-lockdown levels for the rest of the year.

With the temporary closure of many physical branches and difficult operating conditions for call centres, turnaround time was raised in the bulk of these service complaints. Many customers reported poor responsiveness from telcos and of having to try contact them on multiple instances when seeking assistance.

Over half of all mentions requiring a response went unanswered

Despite telcos’ efforts to up their game in assisting customers on social media after the implementation of lockdown, at its best the industry’s response rate was 56.9%. Potentially the most alarming finding, however, was that in 2020, more than half of all mentions requiring a response from network providers did not receive one.

Out of all the telcos, rain was most impacted by service complaints, suggesting their affordability approach came at the expense of customer experience. Despite ranking first in overall Net Sentiment, MTN customers appeared to struggle the most when trying to contact their network provider telephonically. These complaints increased steadily from April to June, suggesting the initial stages of lockdown impaired MTN’s call centre.

In terms of response rate, Cell C replied to the largest portion of its priority conversation while also responding to customers in the shortest time. Whereas Telkom, the only state-owned enterprise (SOE) in the mix, appeared unable to compete with its private rivals when it came to online responsiveness.

From a telecoms industry perspective, Mark Joseph, Africa TMT Industry Leader at Deloitte, says that reduced purchasing power and downwards pressure on prices will continue to create a low margin environment going forward. “In response, some of the telcos will focus on core products and drive digital transformation to become lower-cost operators that are as digitised as possible – prioritising customer facing processes and interactions in order to differentiate through customer experience while maintaining spend.”

In this sense, Joseph believes that digital channels offer an affordable, lockdown-proof and effective touch point with customers. “Self-service capabilities need to be expanded on to permanently convert walk-in customers to more digital, asynchronous channels that deliver faster and better outcomes.”

While echoing Joseph’s sentiment on a required shift toward digital channels, Ray notes that this will require telcos to better monitor, respond to, and report on digital channel feedback from consumers. “Considering that more than half of all mentions requiring a response from network providers in 2020 did not receive one, the telecoms industry has clearly yet to put the adequate systems in place to deal with the volumes of customers reaching out through these channels.”

Furthermore, with increasingly more customers reaching out to network providers on social media to voice their complaints, Ray flags the importance of telcos surfacing complaints that speak to any financial services offerings in order to ensure market conduct compliance. “When mapped out against the treating customer fairly (TCF) framework prescribed by the Financial Sector Conduct Authority (FSCA), nine out of 10 complaints requiring a response were relevant to TCF.

“This not only highlights the applicability of the framework for telcos, but also shows that the industry has a long way to go in treating customers fairly,” concludes Ray.