Majority of Americans are against Trump’s immigration order.

Social analysis shows majority of Americans against Trump’s immigration order Analysis of sentiment based social media points to the unpopularity of proposed Trump policies – such as the border wall and the so-called ‘Muslim ban’ – contrary to findings of traditional polling. President Trump has been quick to point out the polls which seem to be in favour of his immigration crackdown.

A Morning Consult/Politico poll, which Trump tweeted out early February, showed that 55% of Americans supported the travel ban with only 33% explicitly disapproving the suspension of immigrants from seven Muslim-majority nations. 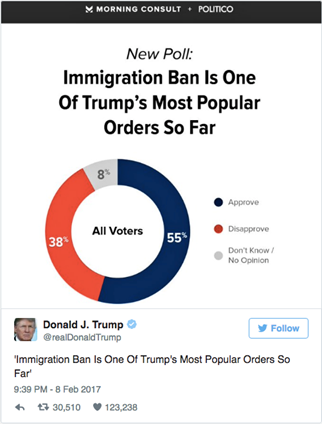 While some polls have shown a slight disapproval overall of the executive order, others seem to concur with the popularity shown by Trump’s preferred poll. Reuters have shown 49% approval; Rasmussen 57% approval; but then a CBS News poll showed 51% in opposition.

Two conclusions thus emerge – the polls are scattered, but a vague pattern of a split country does emerge from the traditionally sourced data.Intriguingly, social media paints a starkly different picture – a picture worth viewing when one considers the credibility earned by social media analytics in defying the polls to call both Brexit and Trump’s victory.

And such a source shows massive disapproval of the travel ban, which has been suspended by US federal courts.

A revised version is, however, expected imminently – with Trump set to drop Iraq from the list of banned countries, as well as an indefinite ban of all Syrian refugees. The temporary halt on admission of all refugees is set to remain. It remains to be seen how the revisions will affect public sentiment.

For now, not only in the US, but in other countries affected by the US, or undergoing similar debate, it would appear that social media users are overwhelmingly negative about the ban.

What is important to remember with social media is that you can only analyse data from those individuals willing to share an opinion, and as a result findings can be exaggerated. That said what is clear from our analysis is that there is a huge amount of negative sentiment towards both the immigration order and the wall.

Data was collected from mid-January into early February, and paints a vastly different picture for Trump as compared to the polls: 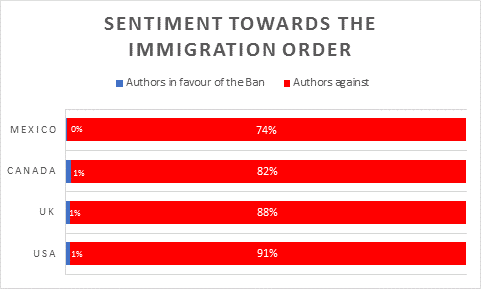 This pattern is repeated in online conversations concerning the proposed border wall between the US and Mexico (for which Trump requires approval from Congress).

In general, American polling has been similar concerning the border wall as the immigration ban – as with all conventional polling, samples and wording of questions offer massive fluctuations, but the country seems to be split down the middle with regards to the wall, with many in favour.

This would seem logical considering it was Trump’s signature issue and he did ultimately win the US election.

But again, social media points to a current dynamic of opposition to building a border wall.

As can be seen from the data, with border walls being less controversial than travel bans (slightly), the amount of opposition is not as overwhelming as that against the travel ban. Nevertheless, once again, a Trump policy is underwater according to social media sentiment. 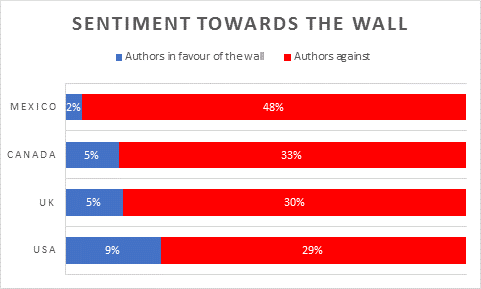 While social media is more pronounced in its swings than polling, the data should give Trump pause for thought – it is clear he is facing a massive onslaught of resistance against his presidency and its signature issues.

While he was quick to dismiss polling that moved against him in the election (and was somewhat vindicated then by his victory), he would do well to remember that scepticism when faced also with positive polling – which no longer seems to give analysts a full picture of the political environment.

Over and over again, traditional polling has been shown up in our roiling global political climate. In what many pundits are labelling either a post-truth, post-facts, or post-trust era – depending on their own political positions – terms such as ‘Muslim ban’ or ‘border wall’ become less about identifying issues of debate than lightning rods for political sentiment – tribal totems almost.

For example, ‘Muslim ban’ plays much differently to a temporary suspension of refugees from seven war-torn countries which hold significant terror threats. Yet ‘Muslim ban’, despite Trump’s clarifications, was generally how social media understood the order.

The same goes for ‘border wall’ – which can conjure up images of xenophobia, or security against illegal immigrants and terrorists, or simply repairing an existing border fence, again depending on what sentiment you bring to the discussion.

In such an environment, polls which are so dependent on the wording of their questions become clumsy in identifying shifts between the ‘political tribes’. In other words, in a heavily divided country, polls battle to cut through the layers of vitriol – because they presuppose generally agreed upon terms.

Social media, on the other hand, with its freely volunteered information-scape, provides much needed balance to any understanding of the swirling sentiments of the various electorates of the world. In short, it tracks conversation in real-time, and in a non-laboratory environment.

Particularly in the US, where Trump is up-ending conventional patterns of debate, data from sentiment drive social media is going to be crucial in understanding public response to the world’s most controversial political figure.