In the aftermath of the dramatic decision by the British people to leave the European Union, many are seeking to understand just how the polls and pundits could have got it so wrong.

Sentiment leading up to the vote suggested strongly that the Remain camp would win – given the conservative nature of the British people and the potential financial fall-out. Despite well-reasoned arguments and general media opinion, this was not to be, however.

There was, however, one indicator that did point to Brexit – social media. In the run-up to the vote this week, media analytics provider DataEQ used its unique human-powered sentiment analysis on a large sample of online referendum commentary, which led to a surprising result – most Brits were in favour of leaving the EU. Says DataEQ CEO JP Kloppers: “In the days running up to the vote, we analysed a sample of 10,000 mentions representing half a million opinions across a range of social media platforms, and found that 56.9% of the opinions expressed were in favour of Brexit, contrary to the results of most of the polls conducted at the time.”

Kloppers says social media analysis has been criticised in the past as being unrepresentative of the general population. “But as we have seen in the USA with the rapid rise of both Bernie Sanders and Donald Trump, we should never underestimate both the voice and the influence of social media.”

Kloppers adds that the traditional approach to social media analysis has been algorithmically driven, even though it is well known that machines fail to understand sarcasm and nuance, particularly in the social media context. “With our unique crowd-sourcing approach to sentiment analysis, DataEQ used people to understand the referendum commentary. Every online comment was independently analysed by several trained contributors to create a 95% confidence level with a 2.5% margin of error, an unheard of amount of precision in media analysis.”

He says the analysis shows that social media has come of age as an overall representation of the population as a whole. “It is no longer a refuge for the angrily opinionated. It seems to talk for the ‘silent majority’ as well. In addition, there is no larger source of public opinion. With accurate analysis, social media performs better than polls in understanding the true sentiment in a population, which is not surprising given the much larger samples involved.

“In the run up to the US presidential election, social media analysis will become more important than ever. We clearly cannot trust only the polls and the pundits – if we can accurately understand the general opinion across the population, we’ll be less likely to be surprised again,” he concludes. 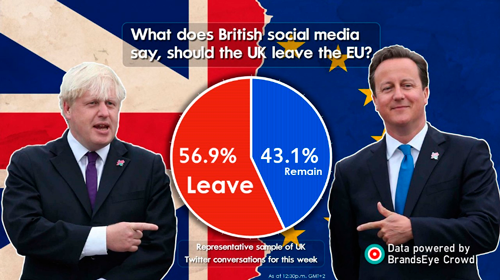