Find out which international music act created the most hype

Since officially kicking off on 30 September 2021 with a spectacular display of fireworks and music, Expo 2020 Dubai has created countless memorable moments – both for attendees lucky enough to be there in person, and those who attended virtual events and experiences.

The highlights of the first ever World Expo hosted in the Middle East, Africa and South Asia (MEASA) region were shared far and wide by the official social media accounts. The @expo2020dubai handle posted over 50 000 times across various social platforms, generating engagement of nearly 500 000 mentions, according to a DataEQ analysis.

Unsurprisingly, among the most engaging posts shared by Expo 2020 Dubai were those which announced the performances of globally known artists. From Kadim Al Sahir, Black Eyed Peas, Alicia Keys and Cold Play, to the massive K-Pop concert on Korea Day, the variety of music being showcased was clearly well-received. 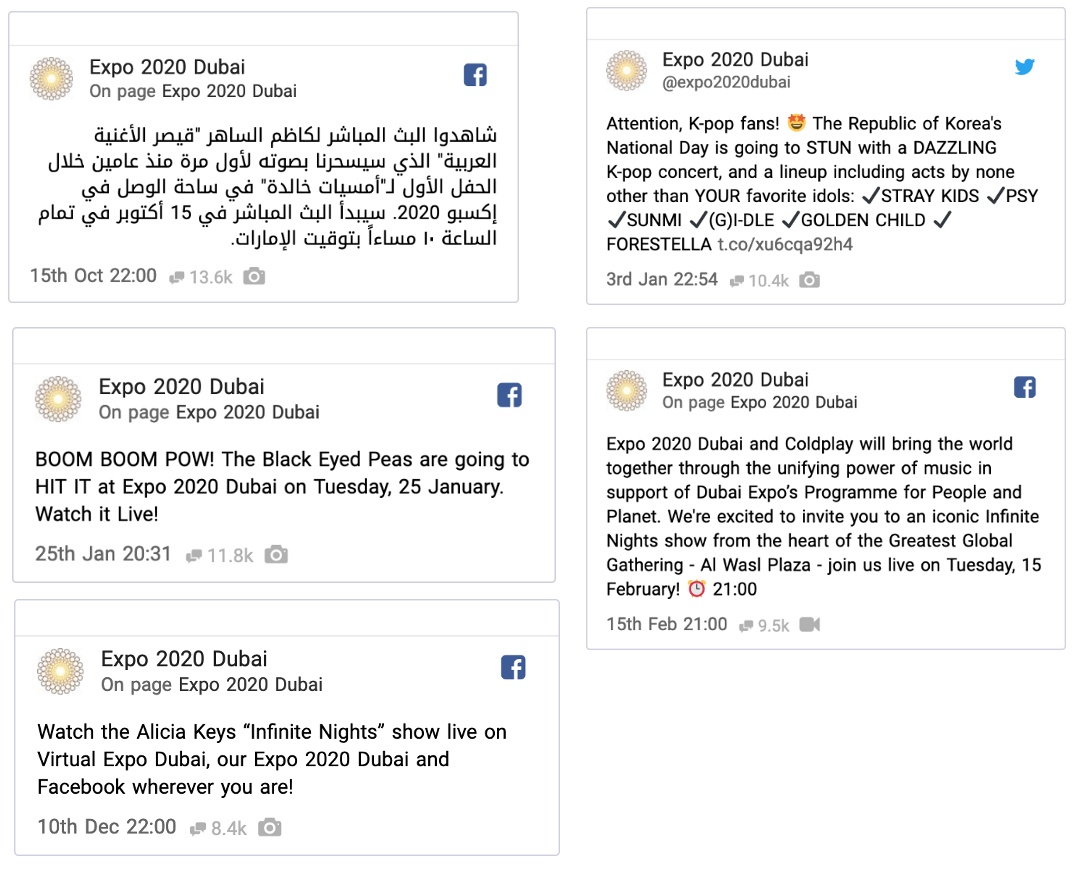 With over 200 participants – including nations, multilateral organisations, businesses and educational institutions – the @Expo2020Dubai handles weren’t the only accounts drumming up high levels of engagement on social media.

On Twitter, the official Italian pavilion account (@ItalyExpo2020) posted more than 2 300 times, while India (@IndiaExpo2020) and Saudi Arabia (@KSAExpo2020) weren’t too far behind with 1 842 and 1 479 posts respectively. When it came to engagement levels, however, Saudi Arabia far surpassed other international partners, receiving over 40 000 interactions with their posts.

As of February 28, 2022, Expo 2020 Dubai has recorded nearly 16 million visitors since opening its doors, with highly positive engagement across all social media platforms. As the event enters its final month, a range of diverse thematic events and National Days are still set to take place which are sure to attract even more onsite and online engagement.