Who is really speaking for the ANC?

Political Analyst Stef Terblanche drills down into DataEQ elections data to look at percieved media bias towards the ANC in the municipal elections.

You’ve all seen the polls and their – widely varying – predictions for Wednesday’s cliffhanger municipal elections. But what are the people really thinking? What are they saying? How much of this public conversation is generated by media coverage, and is each party accordingly being given its fair share of this highly important element in any election?

In short, are voters being given the full or accurate picture ahead of Wednesday?

Not really, says the latest research from DataEQ, a South African-based global media analytics company that collects data from digital and traditional media sources and uses human and computer processing to reach social data accuracy levels of up to 97%.

For instance, if the Democratic Alliance (DA) thought it was getting a raw deal from the SABC – about which the party loudly complained – it should think again. It would seem that the real culprit and leader in projecting pro-ANC bias, is the Gupta-owned ANN7 24-hour news channel. On the other hand, the SABC’s election coverage more or less mirrors that of the other main online media organisations in volume distribution. All media are covering the ANC disproportionately more than other political parties. 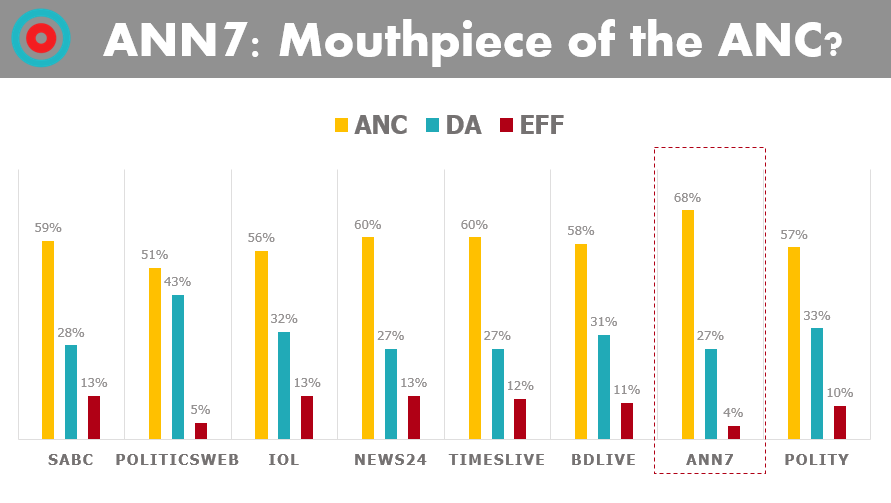 And if you thought that Julius Malema and his Economic Freedom Fighters (EFF) are viewed by most social commentators in a negative light, you may be dead wrong.

A startling fact emerging from this research is that in ANN7’s South Africa, Malema and his party barely exist. While the party gets some mention from ANN7, Malema gets none. In contrast, ANN7 gives by far the most coverage to both President Jacob Zuma and the ANC.

If media coverage is generating citizen conversations, this speaks directly to the fairness or bias involved in media coverage, and the suggested bias here seems to favour the ANC and Zuma.

In June the DA said it was considering legal action against the SABC after determining that the ANC received disproportionately higher coverage than other political parties. It said the ANC had received nearly three times more coverage than the DA and four and a half times as much coverage than the EFF.

However, among the top 6 online media organisations monitored by DataEQ – SABC, IOL, News24, TimesLive, BDLive and ANN7 - it is ANN7 which devoted the highest coverage to the ANC at 68%, with TimesLive and News24 jointly second at 60% each and the SABC third only with 59%. This includes both negative and positive coverage, but then again, any news is probably better than no news at all.

As far as party leaders go, President Zuma received almost the same coverage as his party from the media, with Maimane receiving slightly less coverage than his party, and Malema receiving almost double the coverage his party received. The odd one out was once again ANN7, whose coverage of Zuma towered over the rest at 71%, but who made no mention of Malema at all. 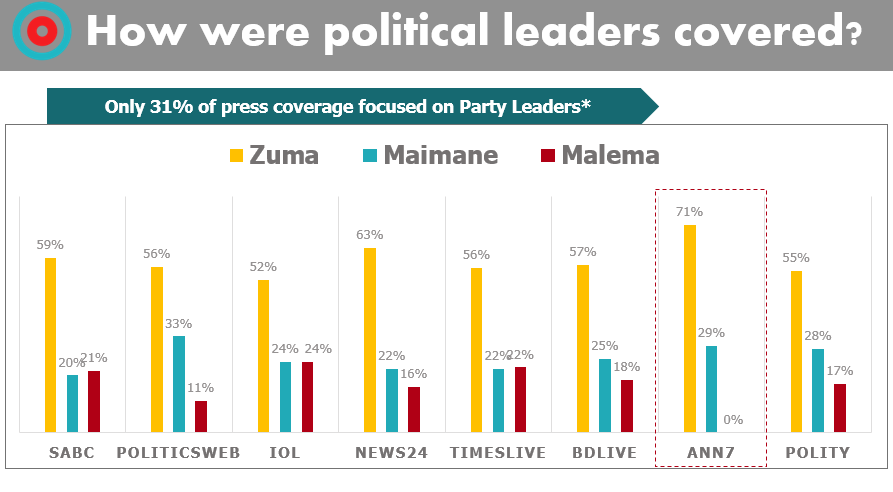 It would seem that while the SABC stands accused of being the ANC and Zuma’s mouthpiece, and not affording the DA a fair deal, its reporting on both political parties and their leaders is more or less on a par with all other media, except for ANN7. It is the latter, rather than the SABC, that seems to be guilty of having the highest pro-ANC bias in its coverage.