Pizza Hut - The recipe for success

Fast food – certain estimates suggest the industry will be worth over $600 billion globally by 2019. From McDonalds’ ubiquitous golden arches to KFC’s red signage, fast food companies’ logos are one of the few relatively unchanging aspects of an industry constantly growing in both competitiveness and complexity. In the race for market share, companies are rolling out larger menus, seasonal products, optional extras, new combos, flavours, toys and more.

Faced with more choice than ever, consumers are also scrutinising the offerings more closely. When a similar (and likely similarly-priced) meal is available from five different spots nearby, careful brand comparisons – in terms of taste, value for money, service, speed and everything in between – are inevitable. BrandsEye recently investigated, using Crowd-integrated data analytics to examine the social media chatter surrounding Pizza Hut. The fast food giant first opened its doors in 1958 and now operates over 15,000 outlets in more than 90 countries.

In the analysis, Pizza Hut’s UK and South African operations were compared. Though much of the success of the basic fast food operating model depends on the efficiencies afforded by standardisation, as DataEQ found out, when operations span multiple markets, there’s no one standard recipe for success.

Great tasting, attractive, quick-to-prepare (and quickly delivered) meals are a foundation taken for granted in the fast food business. Yet, these aspects remain crucial, particularly when competition is fierce. Extras, brand-loyalty incentives and key differentiators – a funny message written on a pizza box (as Pizza Hut offers), for example, or another type of personalisation – are assuming ever-greater prominence, too.

For Pizza Hut customers in the UK, a very foundational factor – taste – was the primary driver of positive online comments, with 28% of all happy customers taking to social media to express appreciation for a great-tasting meal. Positive brand comparisons and comments around delivery value-adds came in at second and third place respectively among happy clients – an indication that while taste may be king, UK consumers do keep a close watch on competitors to ensure they’re getting value for money. 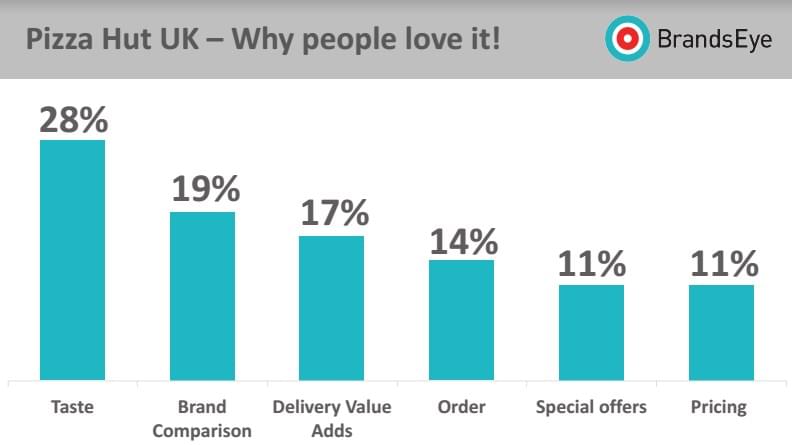 Sources of positive feedback from the UK market

A significant proportion of customers also singled out Pizza Hut’s special offers, pricing and the fun, personalised messages written on pizza boxes as pluses for the brand.

What didn’t UK customers like? Analysis of the less-than-favourable online chatter revealed that turnaround time (37%), incorrect orders (28%) and delivery time (20%) were the top factors driving frustration. 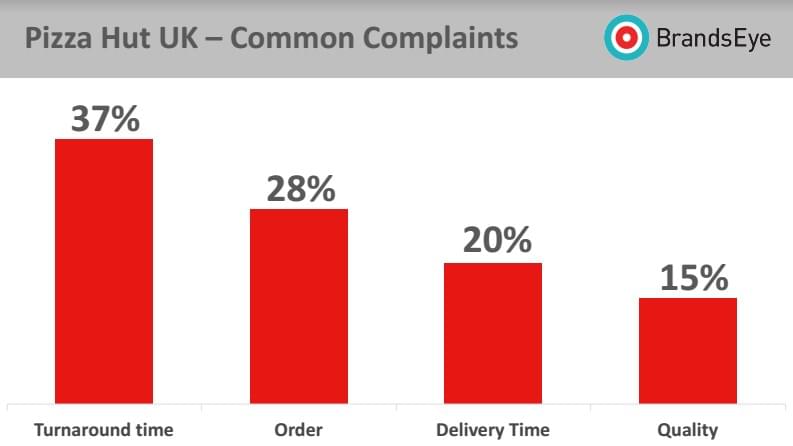 Most common social media complaints in the UK

Interestingly, in South Africa – a market to which Pizza Hut returned in 2014 – an entirely different set of factors spurred both positive and negative comments online.

While customers in SA highlighted their appreciation of great service by helpful, friendly staff, many felt that they were being let down in terms of taste and price, paying too much for too small a portion. 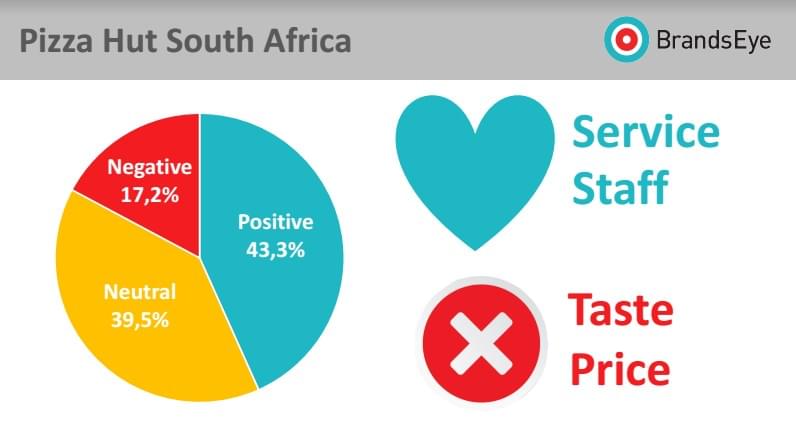 Service and staff were winners in SA

Competition among South African pizza franchises is fierce. Analysis of the overall landscape revealed that the top three brands all rank neck-and-neck – able to edge out only razor-thin margins of 0.1%. For a newcomer such as Pizza Hut, comparisons with such long-time favourites were inevitable. 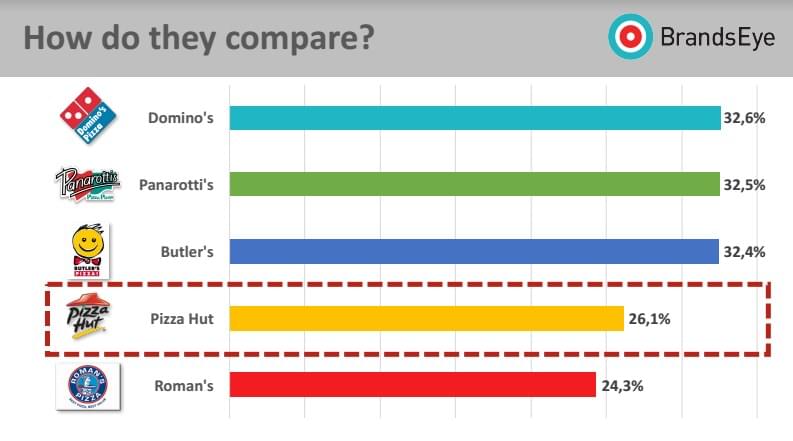 Standardisation remains a fundamental part of the fast food operating model. It allows not only a streamlined ordering processes, stable margins and rapid turnaround time, but also creates an eating experience with which customers become familiar with and to which they may become brand loyal.

What became clear through the analysis, however, is the fact that fast food companies need to blend the drive for brand-wide uniformity with sensitivity to each local market, taking into account specific feedback and demand.

For large multinational – and often transcontinental – companies, accessing accurate insights into what local operations are doing both right and wrong is crucial, but can also be a challenge to deploy at the individual-market level.

Scalable as it is, social media analytics can be a useful tool in penetrating consumer mind-sets and unlocking insights rapidly. By providing a real-time window on what both delights and displeases, decision makers can learn how markets differ as well as how to tailor operations such that the customer always walks away happy.

By combining proprietary algorithms with the insights of real people – the Crowd – DataEQ is able to uncover detailed, accurate information about specific local operating contexts, equipping brands with the insight needed to please consumers in every market.