BrandsEyes’ latest research between 28 August and 4 September looked at online conversation from 150 000 Kenyans in order to gauge public sentiment towards Uhuru Kenyatta and Raila Odinga.

The findings show that Kenyatta’s attack on the Kenyan judiciary angered Kenyans and led to a further drop in support for the incumbent leader. In response to the Supreme Court’s 1 September decision to annul the election results, Kenyatta referred to the judges as “wakora” – meaning crooks or thugs. 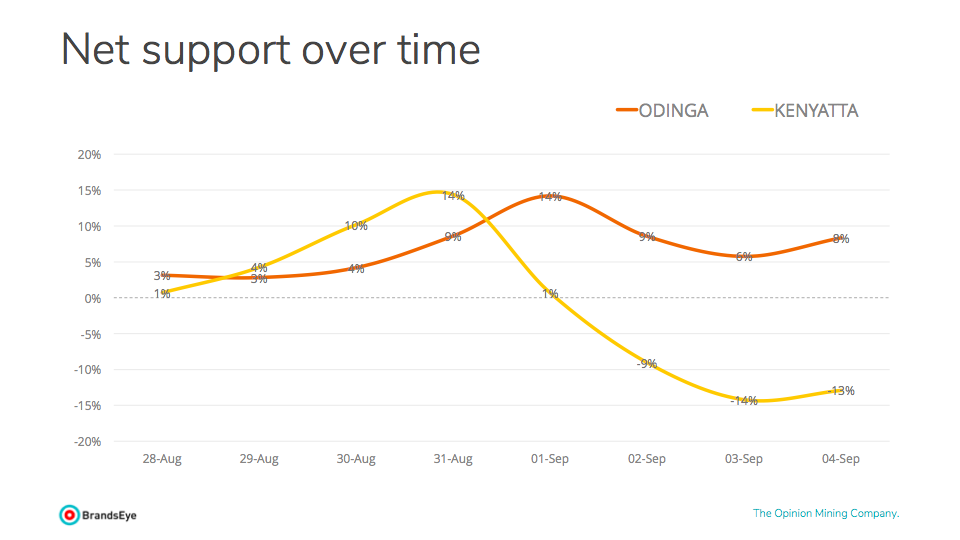 Kenyatta experienced a peak in net sentiment on the 31 August as the Supreme Court investigation concluded. Kenyatta’s supporters rallied around the candidate calling on the Supreme Court to “respect the will of Kenyans”.

The Supreme Court’s decision was positively received by Kenyans who viewed the announcement to suspend the result as a triumph for democracy and the rule of law.

Odinga has managed to consistently stay above the negative threshold. Support for Odinga peaked on 1 September when the election result was annulled.

In the week leading up to the elections (1 – 6 August), 443 000 mentions from 173 000 Kenyans discussing the election were analysed. According to the data DataEQ predicted that incumbent Kenyatta was under threat to lose the presidency.

Prior to the court’s intervention DataEQ data shows that there were 12 937 mentions pertaining to vote rigging and fraud on 9 August, the day after the election. This points to some concern from voters about the fairness of the election. Of those 12 937 mentions, 61% referenced Odinga’s claim that the election system was hacked.

Prior to the election results being announced on 11 August, Kenyan social media signaled that fraud had played a role in the voting process. Highlighting the predictive value of social media as a gauge of public opinion.