We looked at sentiment expressed towards Metro Bank, highlighting major shifts in volume and sentiment in response to a number of reputation incidents associated with the bank between December 2018 and February 2019. These include slow money transfers, accounting errors and a cyber-attack.

To achieve a 95% confidence level, a statistically significant sample of the total posts were distributed to DataEQ’s proprietary Crowd of vetted and trained local language speakers. Each post was coded and verified by multiple Crowd members, who assessed the sentiment in the post (positive, negative or neutral).

Sentiment towards Metro Bank has plunged since December

Between 1 December 2018 – 28 February 2019, we collected 8 775 tweets about Metro Bank. Since December, conversation volume for Metro Bank doubled month on month.

The sentiment towards Metro Bank plunged from 8.9% net positive in December 2018 to a -30.2% net negative in January 2019. This is likely linked to the January announcement pertaining to an accounting error and a cyber-attack in February.

The increase in negative sentiment in January is likely linked to the announcement of an accounting error which led to a sharp fall in share price.

The bank’s share performance and accounting irregularities were the two main topics contributing to more than half of the negative conversation. Conversations about declining shares were discussed more than twice as much as the accounting irregularities. The loans blunder also formed part of these conversations. The cyber-attack contributed to 56.4% of the fraud-related conversations. There were a number of customers who complained about not receiving feedback about funds that had been fraudulently taken from them. 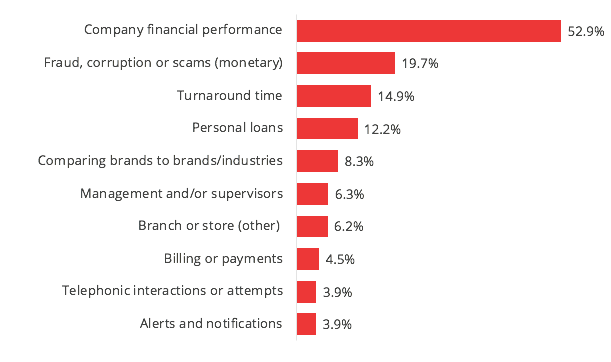 December saw concern about transfers but branches were still prized

In December, the majority of consumer complaints pertained to the turnaround time of money transfers, comprising 8.4% of overall emotive conversation and 21.0% all negative conversation. A number of customers tweeted that payments, including salaries, had not reflected in their accounts. Branches were also the most spoken about facility, with consumers speaking 2.5 times more positively about branches than negatively, contributing to 28.8% of all emotive conversation.

93.5% of financial performance-related conversation was negative. In contrast, this conversation was only 65% negative in December. With Metro responding to only 35% of queries on Twitter in January, it is unsurprising that consumer concerns increased in February.

Accusations of fraud on Twitter increased from an estimated 77 in December 2018, to 120 in January 2019, to 483 in February 2019, implying a growing lack of trust from consumers in response to governance concerns.

February saw a significant increase in Metro customers threating to churn. That was likely compounded by reputational issues covered in the press. But despite negativity about financial performance and governance concerns, complaint resolution was the biggest frustration for customers who threatened to leave the bank.

This preview forms part of a larger piece of research about UK challenger banks, which is due to be released by DataEQ in late April 2019. The full study tracked 118 470 consumer posts about Atom Bank, Metro Bank, Monzo Bank, n26, Revolute, and Tesco Bank from 1 December 2018 – 28 February 2019.