Analysis of banks, insurers, and telcos in East, West, and Southern Africa

Across East, West, and Southern Africa, consumers are using social media to share their experiences with products and services but have not been receiving the responsive customer service they expect. Between May and July 2020, less than half of consumers who tweeted at telcos, insurers and banks looking for assistance received a response from the brand, according to DataEQ’s African cross-industry sentiment index.

The report by data firm DataEQ used their proprietary blend of AI and human crowds to analyse 688 154 social media posts in the banking, insurance and telco industries to better understand consumer expectations online and how these have evolved, particularly during the Covid-19 pandemic.

Less than half of all customers who reached out to their bank, insurer, and telco on social media received a response from their service provider. When organisations did respond, they took anywhere from one hour (in the Southern African insurance industry) to four days (in the East African banking industry). Across regions the banking industry was the most responsive on social media, however, the industry also saw some of the slowest response times, with customers waiting for up to 99 hours (4 days) for a response from their bank. 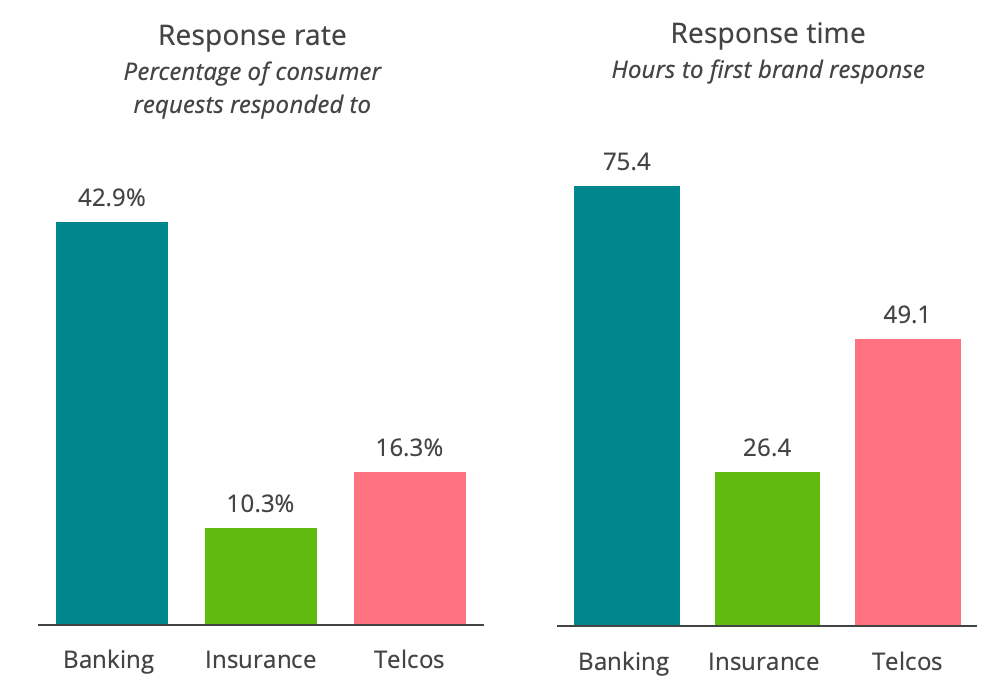 Response conversation is limited to consumer mentions on Twitter, from mentions that are neither reshares or replies mentioning the service provider’s support handle(s) directly. 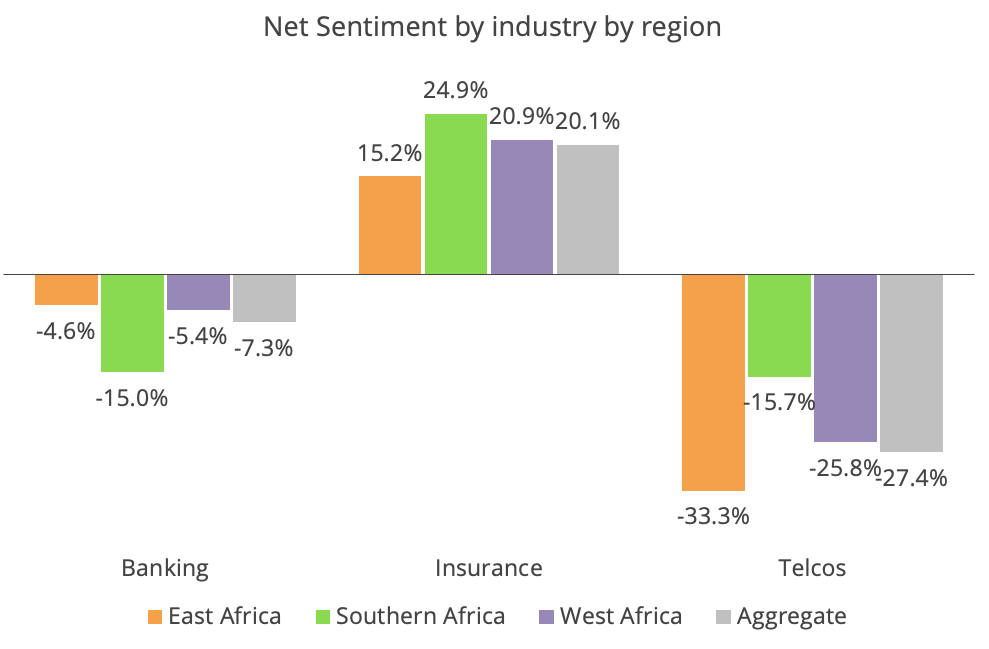 Consumers most dissatisfied with telco brands

All telco providers analysed in this study had a negative overall Net Sentiment. More than half of telcos conversations featured either a request for assistance from a customer or a customer providing feedback to the brand. Airtel received the lowest scores out of the companies analysed. This was evident across multiple countries of operation for the brand.

The insurance industry has been most impacted by Covid-19 conversation

One in 10 consumers speaking about insurance over the reporting period mentioned phrases related to Covid-19. In Nigeria, this was primarily driven by the relief programs undertaken by insurance companies to reduce the effects of Covid-19 on customers. This included contactless doctors visits offered by AXA Mansard and premium discounts on vehicle insurance offered by Leadway Assurance.

Banking had the second-highest proportion of Covid-19-related conversation. This is often linked to the promotion of cashless and contactless payment solutions, digital platforms, as well as relief plans aimed at SMEs.

Net Sentiment for all brands analysed per industry

DataEQ CEO, Nic Ray explained that the firm wanted to gain a deeper understanding of how consumers interacted online with key brands and industries, particularly during the pandemic “Covid-19 has driven digital adoption across the world and especially in Africa. We wanted to understand what consumers were feeling and how industries were handling the increased demand for social customer service.”

“As African governments and businesses encourage the use of digital platforms, and mobile internet penetration increases, more consumers are going to seek customer service on social media. How organisations identify, interpret, and respond to this growing source of consumer feedback will be critical to building sustained brand loyalty, reducing risk, and growing market share.” Ray added.

DataEQ collected 688 154 social media mentions about the three industries and three regions, East, West and Southern Africa, from May to July 2020. A sample of 30 918 mentions was distributed to DataEQ’s Crowd for sentiment analysis. Mentions were assigned sentiment scores of positive, negative or neutral. As South African conversation makes up over 60% of conversation relative to industries in the rest of Africa, and 22 times as many conversations as the brands tracked for Southern Africa, it was decided to exclude the country from analysis as it would skew conversation from the region. Future research may include South Africa and explore other regions including North Africa.