An analysis of Saudi’s leading banks based on customer sentiment.

Covid-19 lockdown measures have been driving an increasing number of Saudi and United Arab Emirates (UAE) consumers online to purchase products and services, and lodge customer service queries across a number of industries. DataEQ is compiling weekly reports during Ramadan to examine industry consumer sentiment and trends on Twitter. This report examines customer experience for four Saudi banks, Al Rajhi, Al Ahli, Riyad Bank, and Saudi Investment Bank (SAIB) during the first two weeks of Ramadan from 24 April to 7 May 2020. 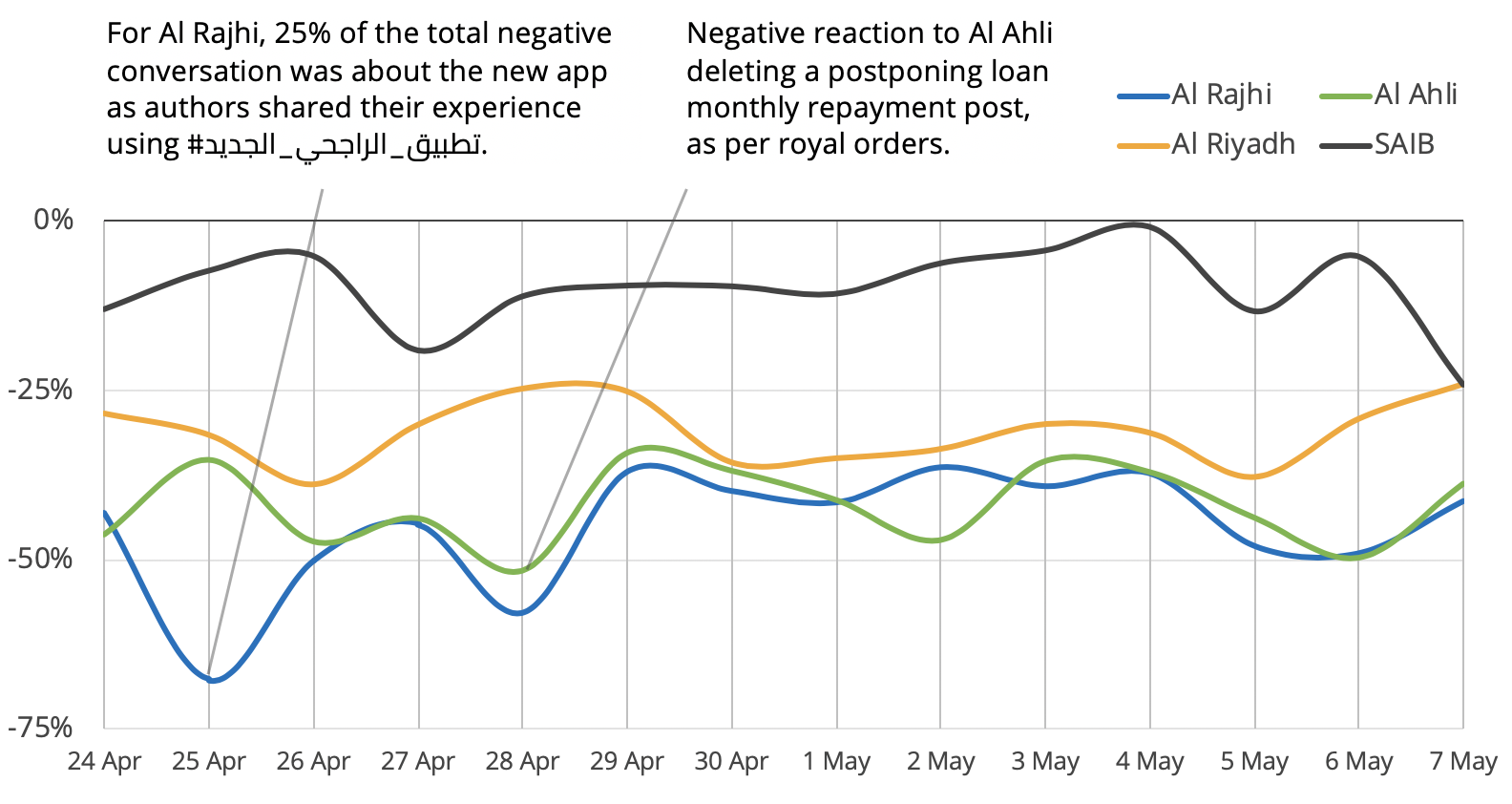 Net sentiment over time for each bank analysed 24 April to 7 May. 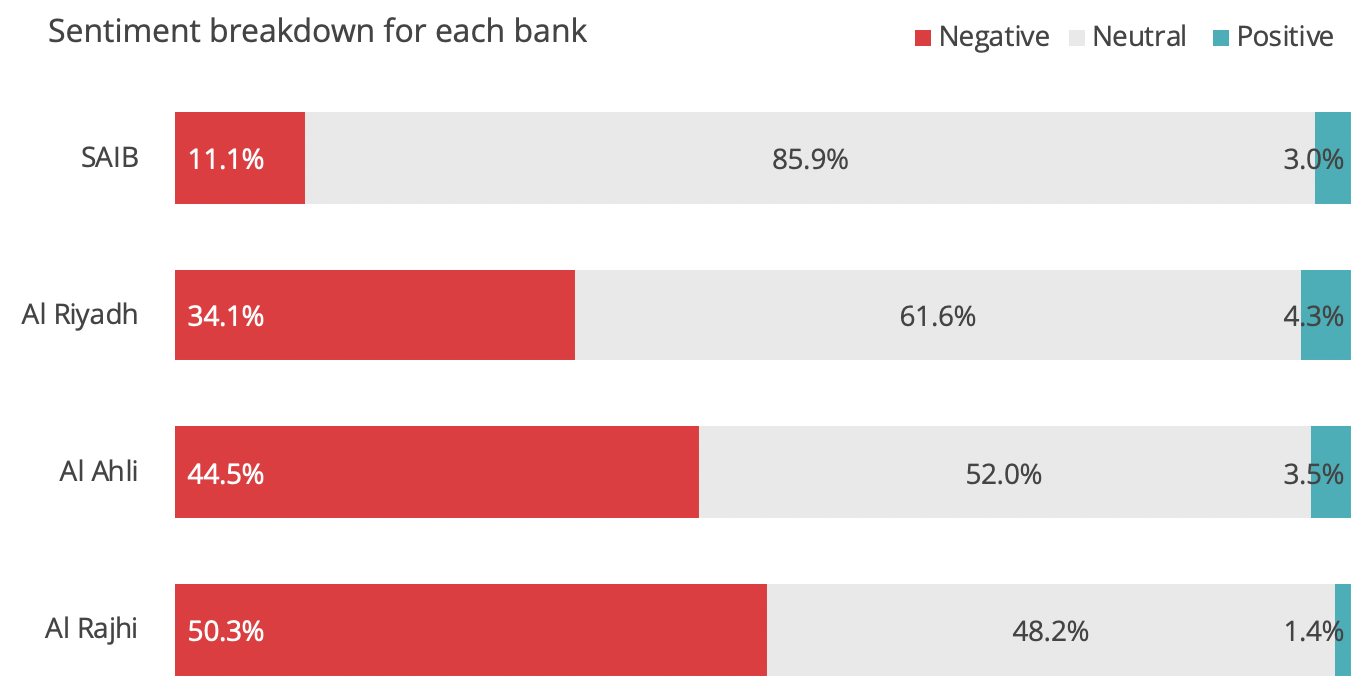 Comparing netiment sentiment for each bank analysed 24 April to 7 May.

Al Rajhi’s conversation on Twitter was more emotive compared to the other four banks. 25% of their negative conversation was about their new mobile app.

SAIB had the largest portion of neutral data as a result of a daily Ramadan competition. Conversation about the مفاجآت_وااو# contributed to 83.3% of SAIB’s total conversation volume.

Across all four banks there was very little positive engagement, with Riyad Bank having the most at 4.3% as customers referred other authors to the bank for their good customer service and loans products. 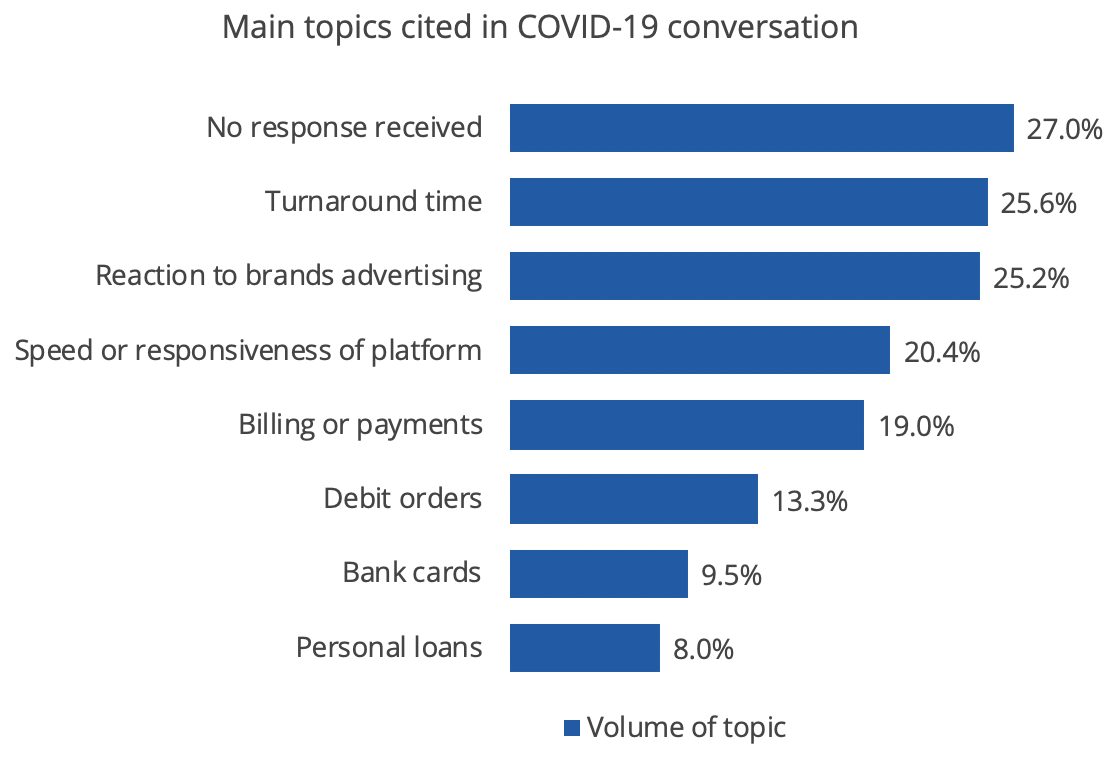 The most prevalent theme was no response received and turnaround time, as authors complained about the lack of response from brand channels, especially Twitter direct messages.

The main contributor to conversation about reaction to brand advertising was a tweet from Al Ahli’s about the postponement of monthly loan repayments. The tweet was deleted and a new tweet made which provided clearer eligibility criteria. Both received complaints.

Over 14% of Al Rajhi conversation was about their new mobile app. consumers noted that the old app was better, with fewer crashes, faster speed and a simpler interface. During Ramadan and since Covid-19 began, consumers complained that banks were still debiting loan repayments despite the royal order to postpone them.

For Al Rajhi, almost 15% of the total conversation in the first two weeks of Ramadan was about its new mobile app. Consumers shared their experience using the app using the hashtag تطبيق_الراجحي_الجديد#.

On 24 April, Al Ahli tweeted that they would be postponing monthly loan repayments without penalties. No eligibility criteria were contained in the tweet, but there was a small note in the photo to indicate the terms and conditions. Consumers complained about the terms and conditions being hidden (?) and accused Al Ahli of being dishonest and untransparent.

The next day, Al Ahli deleted the tweet and posted a new one with clearer terms and conditions. The new tweet drew even more consumer ire. Consumers suggested the bank remove the conditions altogether to benefit society during the current pandemic.

Al Rajhi and Al Alhi’s channels were all net negative 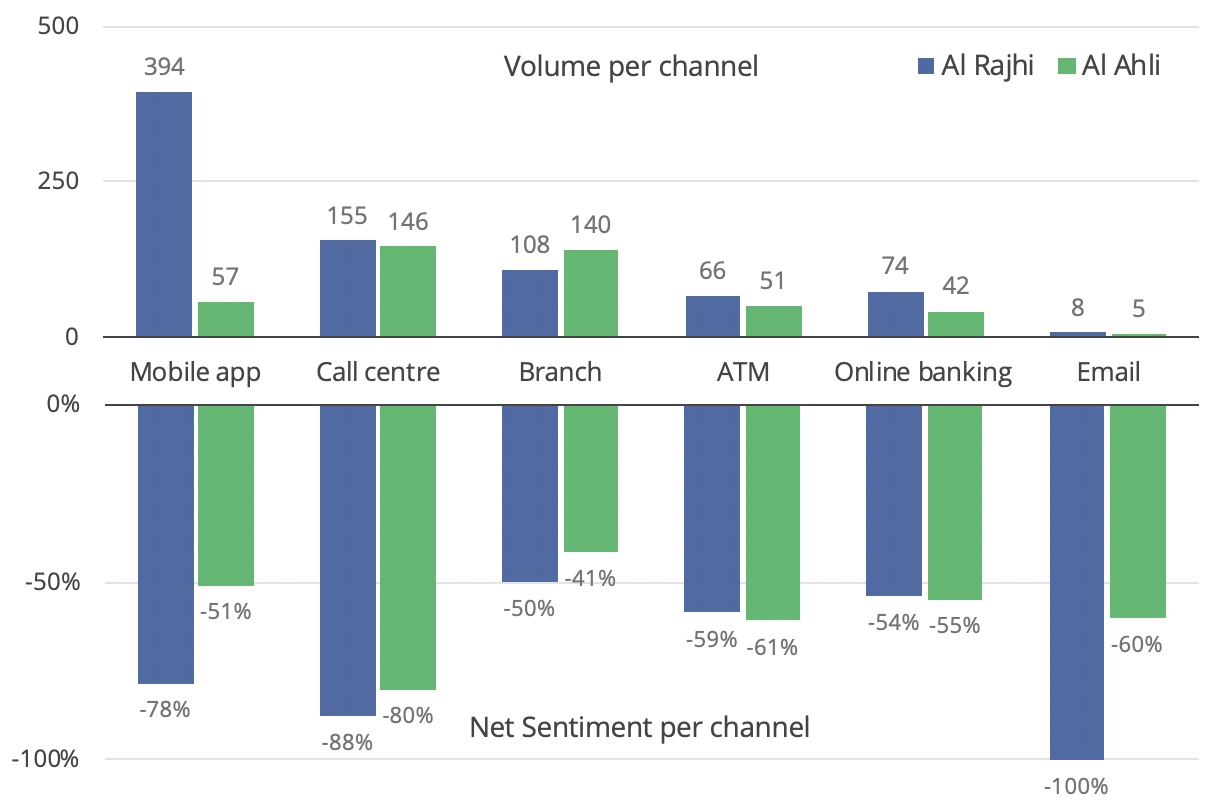 For the two largest banks, mobile app, call centre and email were the channels that received the most negative sentiment and no channels had net positive sentiment overall. Mobile apps, call centre and branch were the most frequently cited channels in the sample. Consumers complained that due to app issues and downtime, they had to contact call centres or visit branches to address their needs. This suggests that if banks want to take the pressure off traditional channels they need to focus on maintaining and improving their digital operations.

During the month of Ramadan, DataEQ is compiling weekly reports examining a selection of banking, telecommunications and supermarket retail brands in the UAE and Saudi Arabia based on publicly available Twitter data.