Consumers threaten to quit networks as half of all complaints go unanswered and Vodacom bungle implementation of Icasa data regulations.

Consumers threaten to quit networks as half of all complaints go unanswered and Vodacom bungle implementation of Icasa data regulations.

SA consumers are unhappy with telco providers’ data pricing and poor customer service as 1 in 10 threatened to switch networks and 44.4% of complaints on social media went unanswered by providers.

SA telco providers should ignore the court of public opinion at their peril. Published today, DataEQ’s SA Telcos Sentiment Index analysed some 500 000 social media posts about telco providers. The results paint a dire picture for Vodacom and its competitors, who failed to impress from data to customer service. 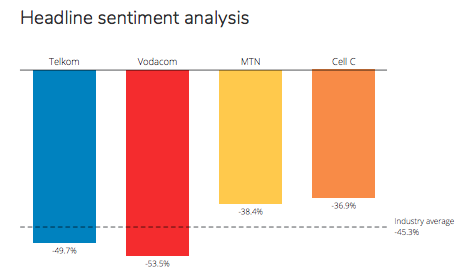 Industry-wide net sentiment towards the four major telecommunications providers was -45.3%.

Vodacom’s implementation of Icasa’s data regulations damaged its reputation and drove consumers to quit the network.

In an analysis of conversations pertaining specifically to the new Independent Communications Authority of South Africa (Icasa) data regulations, consumers were the most negative about Vodacom.

Vodacom faced consumer ire over data rollover and transfer charges. Consumers accused Vodacom of finding loopholes to avoid complying with the spirit of the new regulations. This prompted many to consider changing providers. In contrast, consumers appreciated Telkom’s implementation of the regulations after the network offered both services free of charge and was the first network to implement them. 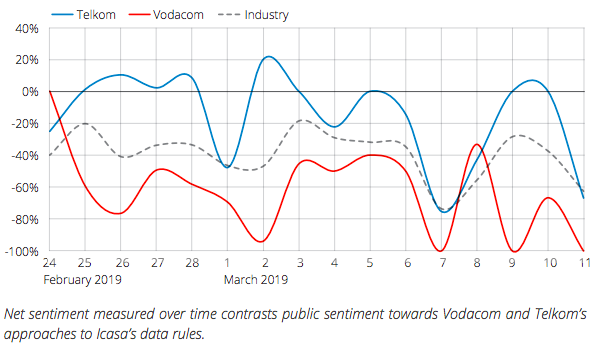 An estimated 120 000 online consumers expressed negative sentiment towards their provider. About 10.0% of these consumers expressed an intent to cancel with them. More than a third of consumers looking to cancel blamed customer service. While Telkom saw the highest proportion of customers discussing cancellation, it was also the preferred alternative for those looking to switch providers, largely due to its affordable data offerings.

Across the sector, customer service made up 47.2% of complaints; these were largely about turnaround time, accounting for 36.9% of complaints. 44.4% of complaints on social media went unanswered by providers. Of those that were answered, 61% concluded with the consumer being unhappy.

The findings paint a grim picture of a sector that, amid pressure for cheaper data, is already desperate to identify areas of differentiation and new revenue streams. DataEQ SA Chief Executive, Nic Ray, noted that the findings do present some opportunity for providers. “By delivering on the basics, providers can differentiate themselves and reduce churn through improved customer experience. When looking to acquire new customers, Telkom has shown that the packaging and pricing of data products is the most important factor driving consumer choice right now”, said Ray.

The unpredictable spread of consumer dissatisfaction on social media means that telco providers can no longer view it simply as a marketing platform, but must think of it as a barometer for their market conduct and reputation. Ray added: “Providers who capitalise on this, with responsive and innovative customer care, will win the battle for consumer loyalty and reduce churn of post-paid customers. Those who do not, put both their reputation and bottom line at risk.”

DataEQ retrieved 538 740 posts pertaining to South Africa’s four major telecommunications providers for the period 1 December 2018 to 28 February 2019. The providers analysed in this study were Cell C, MTN, Telkom, and Vodacom. Data sources included all the main social networks, namely Twitter, Facebook, and Instagram as well as multiple other online sources.

To carry out sentiment analysis with a 95% confidence level and an overall 0.8% margin of error, a random sample of 54 436 of these posts was processed through DataEQ’s Crowd for evaluation and verification. Posts were assigned sentiment scores of positive, negative or neutral. In some cases, a post can be both positive and negative towards a provider.

Topic analysis enables a granular understanding of the specific reasons driving consumer sentiment. 78 telecommunications topics were identified through a process of crowd-sourced qualitative content analysis. A sample of 19 685 sentiment-bearing posts (only positive and negative) was sent to the Crowd, who identified which of these 78 topics were contained in each post.