In its fifth year of producing the Index, DataEQ collected more than 2 million social media posts from consumers about South African banks from September 2019 to August 2020. DataEQ’s proprietary Crowd of human verifiers analysed some 500 000 posts for sentiment and conversation themes, including the Treating Customer Fairly (TCF) outcomes prescribed by the Financial Sector Conduct Authority (FSCA).

In July, the FSCA published the final Banking Conduct Standard designed to ensure that banks operate with transparency and fairness. The Standard is based on the six TCF outcomes and empowers the regulator to take action against banks who do not comply.

In addition to improving fairness outcomes for customers, the Standard prescribes the establishment of a Complaints Management Framework that includes, among other things, the categorisation of complaints made by customers. As is evidenced by the findings of this Index, thousands of these complaints are made on social media, 90.7% of which contain TCF themes and 47% of which have gone unanswered by banks in the last year. Overall, this should be alarming for the industry who are missing out on considerable volumes of important customer interactions and are therefore unlikely to have been reporting on them for regulatory purposes. As such, they risk facing heavy fines from the regulator as well as the significant reputational risks that such sanction would generate.

Banks fail to respond to 47.3% of customers as demand for support grows during Covid-19

With the influx of customers seeking assistance on digital channels, banks struggled to keep up with the demand for support on social media. 47.3% of priority customer conversation on social media went unanswered by the banks. Despite receiving early praise from customers for their initial commitment to help South Africans with relief efforts, sentiment towards new Covid-relief programmes quickly declined as the rollout plans drew significant complaints. 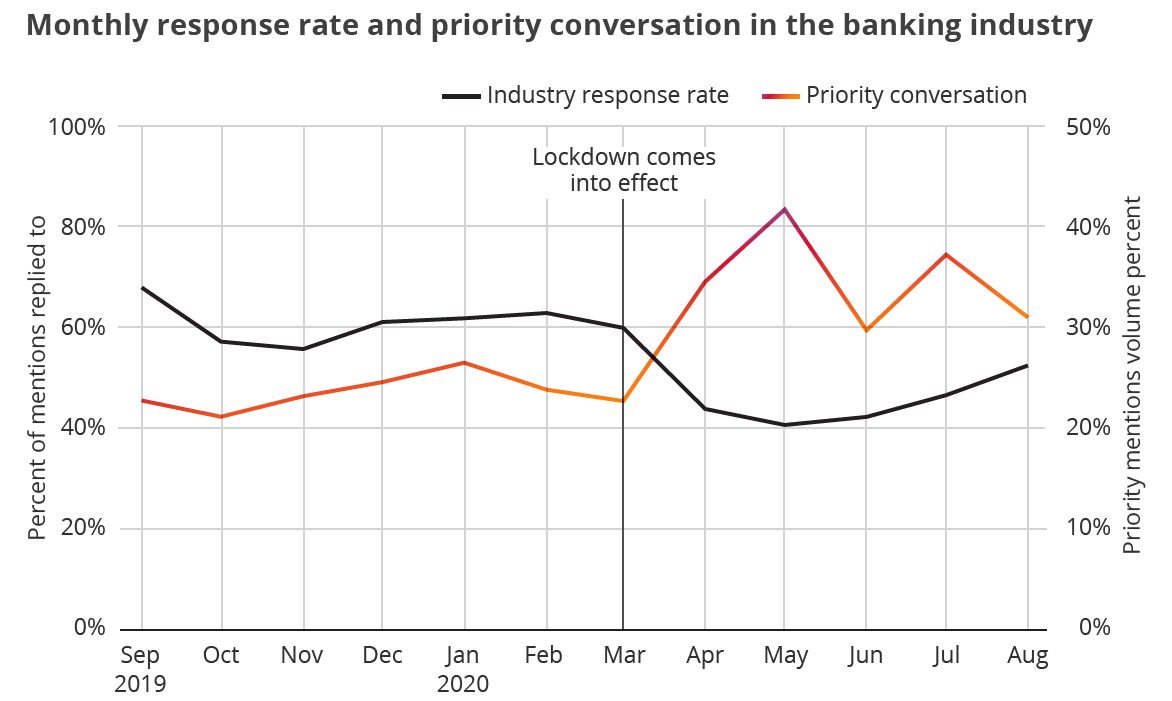 Nedbank and African Bank were the two most responsive banks. While Discovery Bank’s customers were the least likely to receive a reply from their bank on Twitter, only replying to about one out of every ten priority interactions.

90.7% of customer complaints on social media included one of the six TCF outcomes as prescribed by FSCA’s Banking Conduct Standard. Discovery Bank had the highest proportion of complaints linked to TCF outcomes.

The increase in digital banking products has further optimised customer experience, in turn reducing the reliance banks have on physical facilities and in-person staff. As such, the increased reliance by customers on digital channels meant that any system downtime had a far greater impact on customer frustration than in previous years.

African Bank received almost four times as many purchase enquiries from prospective customers, relative to the industry average. More than half of these requests came as a result of the bank’s successful advertising, in particular, loans offering small sums for the purposes of “tiding [consumers] over during tough times”. The bank’s successful financial performance since its 2016 restructuring drew significant praise.

Discovery Bank was the worst performer in the industry. Customer service is a key issue for the bank. Customers reported having to communicate with multiple contacts at the bank to receive a response and waiting long periods for help. This led to the bank having the worst response rate to social media queries, suggesting it lacks the requisite capacity to serve its clients. As a result, Discovery Bank had the highest share of cancellation threats as a share of its priority conversation. 76.7% of customers threatening to leave the bank cited its slow turnaround time. 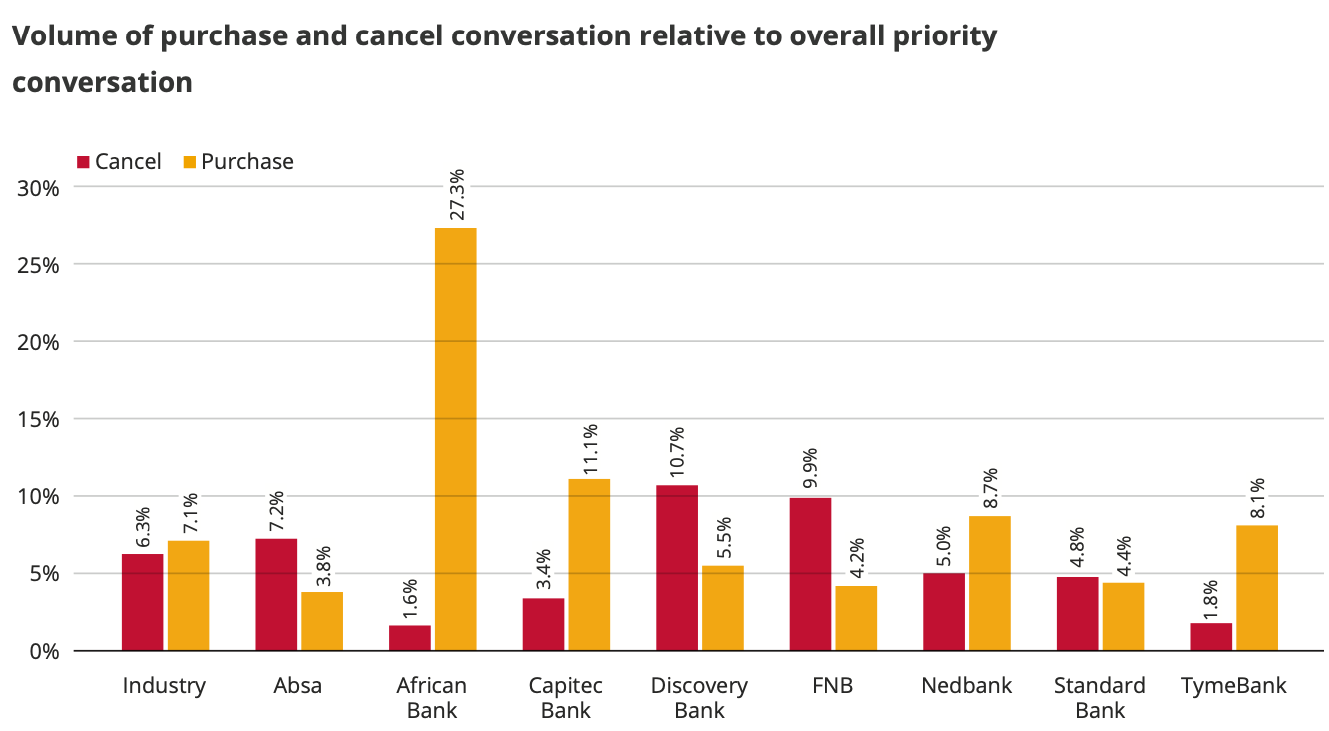 Nedbank’s sentiment declined by 32.9 percentage points to a six-year record low. Its Net Sentiment fell from an industry-leading 20.4% in 2019 to -12.5% in 2020. This can be largely attributed to the conclusion of the successful 2019 partnership with the Global Citizen movement which contributed significantly to its 2019 performance. The bank was also affected by reputational sentiment decline .One of the factors contributing towards the reputational decline were negative social media mentions relating to a February 2020 article on a litigation matter in which a black bond holder sued Nedbank R2m for loss of earnings. The article alleged racist practices. The matter is yet to go to trial.

Since 2015, Capitec has held the first or second position in this Index. In 2020, it is the incumbent bank with the highest Net Sentiment. This consistent performance over five years remains driven by the bank’s affordability. Despite its strong position, for the first time in six years, Capitec experienced a net negative Net Sentiment driven by the unreliability of its app.

Volume of complaints on social media is concerning to the regulator

Commenting on the findings, DataEQ CEO, Nic Ray said: “In 2020, the banks faced an immense challenge in meeting the growing social customer service demands of consumers. Covid-19 has accelerated this preference for digital interactions and banks will now need to ensure that they are equipped to rapidly identify and respond to these queries. Our findings show that banks who are not able to meet service expectations yield high rates of cancellation threats”

“In addition to the pressures of growing digital demand, the FSCA has published its final Banking Conduct Standard, enforcing adherence to TCF conduct outcomes and requiring banks to accurately report on complaints, critically that includes complaints made via social media” Ray added.

DataEQ banking analyst, Channon Perry noted that “the volumes of unanswered customer complaints should be concerning for the banks who are missing out on critical customer service queries and are therefore unlikely to have been reporting on them for regulatory purposes.”

The high volumes of conduct-related complaints on social media are concerning to the FSCA. Caroline Da Silva, Divisional Executive of Regulatory Policy at the regulator says that the industry must pay close attention to digital complaints, noting, “monitoring social media will help banks identify the root causes of complaints and ensure that their customers do not have repeat issues in future. This will, in turn, improve overall conduct and help them deliver fair outcomes for their customers.”