Which insurance products do consumers complain about most on social media?

And why was car insurance the most spoken about

Times have been tough for the South African insurance industry as a whole, but some product sectors have received more heat on social media than others. This was revealed in the newly released South African Insurance Sentiment Index The index, which is based on an analysis of over 450 000 social media posts from consumers about 15 insurers from 1 April 2020 and 30 March 2021.

According to the index results, the insurance product that received the highest volume of conversation on social media was car insurance (29%), followed by funeral cover (25.5%) and business insurance (25.3).

Conversation around car insurance peaked during Level 5 lockdown in April 2020, with many consumers demanding payment holidays and premium reductions during this period. While this could have signalled trouble, insurers responded promptly, resulting in the car insurance landscape becoming more competitive during this time, but keeping customers happy for the most part.

Consequently, the category of car insurance actually obtained the highest Net Sentiment of 22.4%. King Price and MiWay both drove positivity for car insurance — a notable campaign was MiWay’s MiWheels At Home Cover in which customers who work from home were given up to 20% off their premiums. 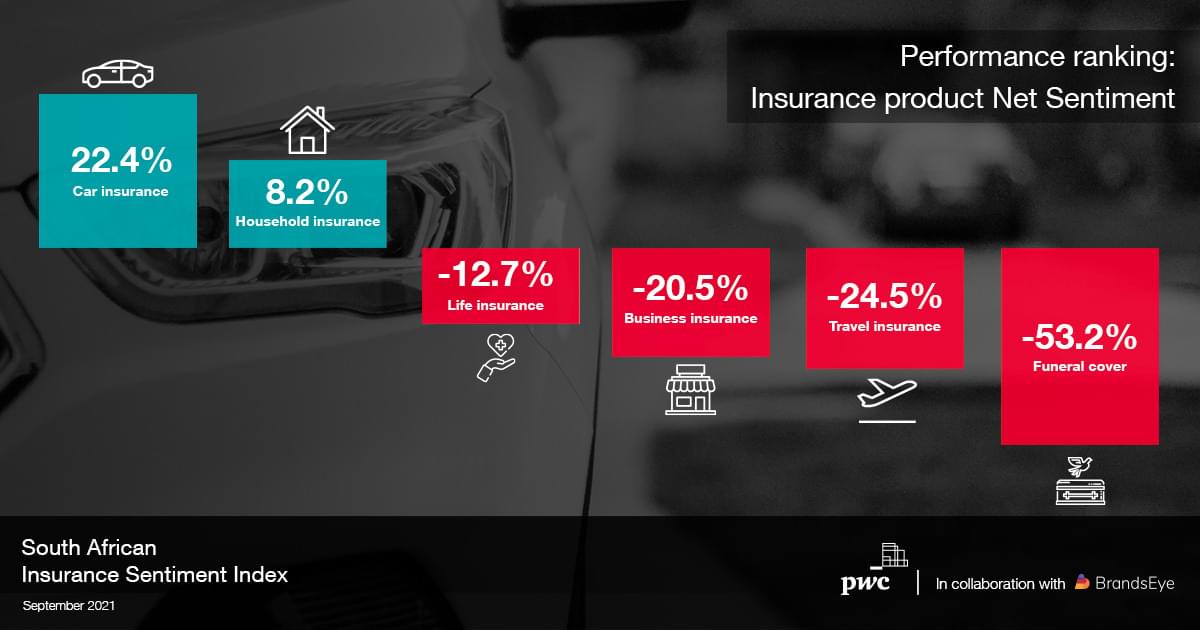 On the other end of the spectrum, the funeral insurance category had the lowest Net Sentiment of -53.2%. This was largely as a result of dissatisfaction about unpaid or late claim payments. While delayed payouts caused stress and disappointment for customers across the broader industry, the issue was seemingly was most acute among funeral claims where an expectation for quick turnaround had been created by insurance brands.

Customers complained about turnaround time, often citing difficulties getting money in time to prepare and pay for funeral arrangements. Communication issues were also cited in complaints, with customers receiving delayed or no response to claims lodged, in addition to instances where claims were rejected.

At the end of day, claims remain the most important customer engagement stage for both an insurer and the policyholder — this is the outcome that insurance propositions are built around and, depending on the product and event, can often be an emotional experience for customers.

There is ever-increasing pressure to transform the claims function in response to changing customer expectations and the availability of disruptive technology and data-driven insights. Coupled with this, the COVID-19 pandemic has driven a significant increase in claims volumes across both long- and short-term product offerings, placing added pressure on the claims functions in all organisations.