On Friday the 20th January 2017 the unwitting Twitter user may have been inclined to believe that respected South African journalists were suddenly squaring up against Finance Minister Pravin Gordhan.

At a quick glance, the first of these appeared to be from Radio 702 where financial journalists Alec Hogg and Peter Bruce were quoted expressing anti-Gordhan sentiments:

10 minutes later, these two posts were followed by Huffington Post South Africa seemingly quoting Ferial Haffajee’s views against the minister and 4 minutes later a similar post appeared to come from the Sunday Times.

These accounts – despite their initial appearance, were in fact fake and all had “parody account” listed in their Twitter bios. The more astute users of this platform were quick to alert others, this was followed by allegations of “paid twitter” having a hand in it.

The allegations that covert forces are operating on Twitter to defend certain individuals largely came to a head over the release of the State of Capture report in November 2016, and various researchers have tried to specifically identify those who aim to slander, amongst others, the Finance Minister.

The Daily Maverick also published an in-depth report on these paid authors. More recently, following an amaBhungane expose on an alleged ANC “war room” during the 2016 local government elections, Shaka Sisulu is accused of being a member of “paid twitter”.

These fake news accounts were relatively dormant before January 20th and the last tweets from any of them were on the January 6th. On the 20th these accounts collectively published 38 tweets in the space of 50 minutes, and then nothing thereafter. 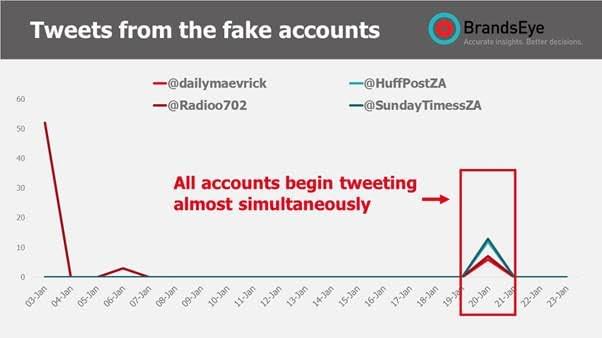 The mentions from these accounts were published between 16h49 and 17h38 and response to these tweets was quick – 92% of all the retweets happened in the first 2 hours after the content was posted.

The behaviour of those retweeting this fake content was also eerily similar in nature. There was a very strong positive correlation between their tweeting behaviour (where r>.87). All these relationships were statistically significant – suggesting a highly co-ordinated effort. 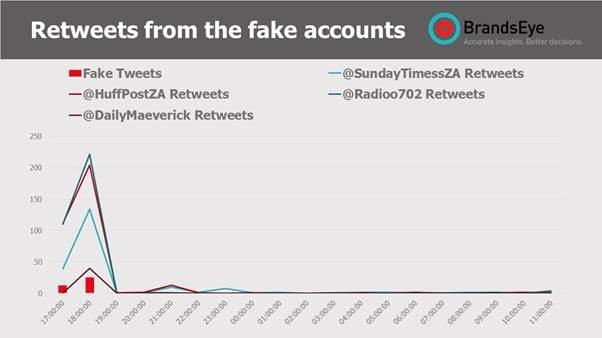 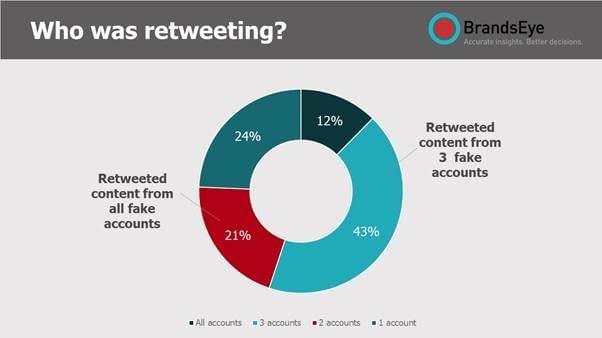 The strong correlation in behaviour and the clear overlap in authors again suggests that they were acting in unison to disseminate the fake content.

Using the above authors as a starting point, we distilled the overlapping authors into a list of 225. From 1 July 2016 to 23 January 2017 these authors have generated 87 829 mentions, this is an average of 390 mentions per author. One of the most prolific of these contributors had 1 420 tweets in December – roughly 47 tweets per day.

What was striking analysing their activity over the past 6 months is that almost all of them were engaged in conversations over the November and December period – just after the State of Capture report had been released. 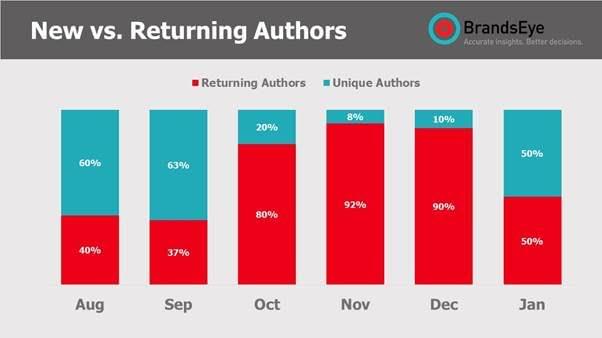 In other words, returning authors refers to those who had posted at least once in previous months. This group was most heavily deployed between October and November.

What is their message? 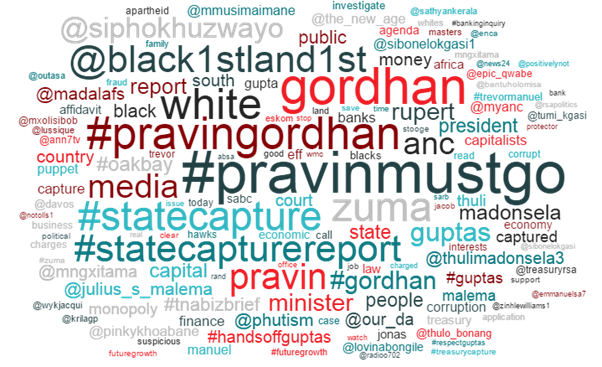 Also, another prominent theme is State Capture (#StateCapture or #StateCaptureReport). There are however stark differences in how these authors discuss the report when compared to how broader South Africans have approached this conversation. 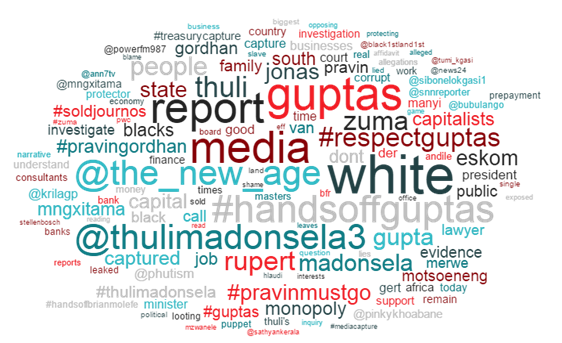 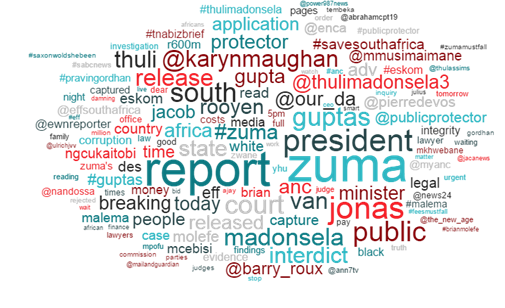 While the broader South African public has tended to focus on Zuma’s role within the State Capture report, it is evident that the tracked authors shift the conversation towards a critique of white capital and white-owned media. Notably, their conversations focused on Andile Mngxitama’s address at the New Age Business Brief event, particularly his statement that the South African economy had been captured by white capital. A striking hashtag used by this group when discussing State Capture was #HandsOffGuptas.

William Bird, director of Media Monitoring Africa, commented to EWN on the matter of the fake news accounts, stating “This is to try and persuade people that there’s another kind of reality, they’re aiming to shift political discourse”. The above word clouds seems to reveal this shift in dialogue.

Conversations also appear to adopt the rhetoric of populist leaders such as Andile Mngxitama and Julius Malema, with a dialectical focus on white capital and reparations. Our data reveals that the company that this group has most viciously targeted has been Absa after Public Protector Busisiwe Mkhwebane’s preliminary report on funds pocketed during apartheid. The conversation analysis also highlights that apart from slandering Pravin Gordhan, it also aims to protect the Gupta family.

While the above research and analysis points to the types of behaviour and conversations this group engages in, we can still only guess as to their ultimate agenda. A number of commentators have alluded to the idea that UK-based PR firm Bell Pottinger – who represent the Gupta’s Oakbay Investments – are behind this.

In December 2016 Business Live reported comments that Johann Rupert had made at Remgro’s AGM. Rupert stated of Bell Pottinger: “Their total task was to deflect attention [from state capture allegations involving the Guptas]. Guess who they took as a target? A client of theirs… Me!” More recently, Rupert told Huffington Post South Africa that he’d received a text message from a member of the ANC stating “The Guptas have hired Bell Pottinger to push the ‘state capture’ story onto you. They’ll earn R24 million, plus expenses, for their work. It will be paid by an intermediary [a known Gupta associate]”. From the conversations analysed above – these assertions appear to be upheld.

Ferial Haffajee, as a victim of one of these fake news stories, tweeted that she believed Bell Pottinger were the culprits.

While Thuli Madonsela similarly hinted that the firm was behind this

Oakbay has denied any involvement in the fake news campaign. Against a global background of fake news, alternative facts, and misinformation – the South African online space seems to enacting what has become a world-wide trend. Particularly in the light of the alleged ANC War Room, South Africans need to keep an eye on potential forces covertly influencing news and social media for their own political ends.