DataEQ retrieved 1 720 810 public social media posts about SA banks from 1 September 2017 - 31 August 2018. A random sample of 521 326 of these posts were evaluated for sentiment by humans on DataEQ’s Crowd platform - enabling an accurate understanding of consumer sentiment and specific issues driving that sentiment.

The sentiment index explores the major issues influencing sentiment among consumers, as well as the reasons consumers left or threatened to leave their banks. With several new digital entrants set to launch soon, the index features an analysis of conversation about digital banking themes.

“Social media is a valuable source of volunteered consumer feedback. Unlike other methodologies, social data is unsolicited and accurately captures how people feel, without the bias of a questionnaire or a focus group moderator” said DataEQ’s CMO, Nic Ray. 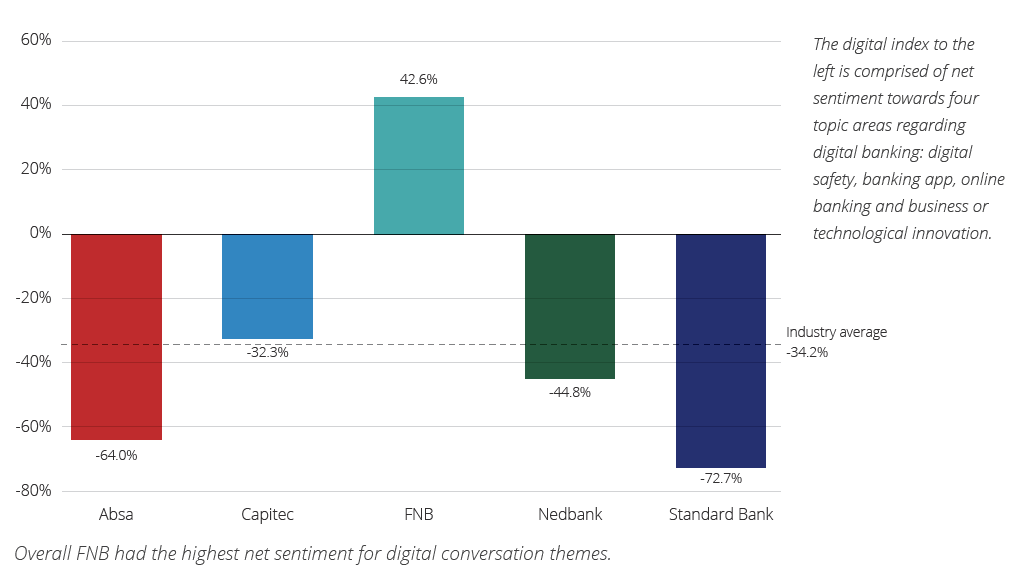 In digital banking conversation, FNB outperformed competitor banks overall, a trend that was largely driven by their innovations over the year, including opening a bank account with a selfie, biometric ATMs and offering passport biometric services in branches.

Standard Bank had the lowest net sentiment for digital themes at -72.7%, with complaints about the app, as well as disruption to online banking services dominating conversation. Nedbank received high levels of negative sentiment for business or technological innovation, a development triggered by consumer backlash against the impact of proposed technological innovations on jobs at the bank.

The most frequently cited reasons across the industry for cancelling with a bank were: poor turnaround times, accusations of unethical behaviour, billing or payments, and telephonic interactions.

While Capitec had the lowest volume of conversation about cancelling, FNB received the highest number of positive comparisons to other banks. Furthermore, when consumers claimed that they intended to leave their banks, FNB was most frequently cited in the conversation as an alternative bank.

Commenting on the report, Karoly Kramli of Deloitte Consulting said, “DataEQ was able to effectively demonstrate the far-reaching effects that public sentiment has on customer experience, and even business performance. By analysing the underlying needs customers expressed online and categorising them into topics, DataEQ was able to provide some of the insights required to drive process optimisation and strategic change”.

Customer Experience expert, Julia Ahlfeldt said, “the results support the notion that delivering on the basics is a key driver of consumer sentiment, but that doing so can also be a point of differentiation. For example, FNB’s implementation of biometric ATM authentication and selfie verification for new accounts help the brand achieve an easy, streamlined experience, but in a way that is also quite innovative”.