Under-pressure consumers are even more fed up with their banks in 2019.

Nedbank had the highest Net Sentiment for 2019. Capitec placed second and is the only bank to continuously maintain a positive Net Sentiment Score over multiple years. Absa placed third, with a five-point decline from 2018. Standard Bank placed fourth, continuing their 3-year decline in sentiment (23 percentage points since 2017). FNB had the largest decline in Net Sentiment of -27 points and had the lowest overall Net Sentiment.

There was a 105% year-on-year increase in conversation about fraud, corruption and scams across the industry. Much of this conversation centred on unauthorised debits and measures banks took to counter this fraud. “This finding is in line with the Ombudsman for Banking Services’ latest report, which showed that 50% of complaints in 2018 centred on fraud”, notes Lara Sierra Rubia, Head of Analytics at DataEQ.

Nedbank’s rise was driven by its successful corporate social investment initiatives. The partnership with Global Citizen significantly improved the bank’s overall performance. Capitec had the best customer experience performance. This suggests that consumers still perceive Capitec to have the best operational performance. FNB was impacted by several reputational events throughout the year, which led to it scoring the lowest Net Sentiment. Standard Bank performed poorly across both reputational and operational measures - having had the worst customer experience sentiment and the second worse reputational sentiment. 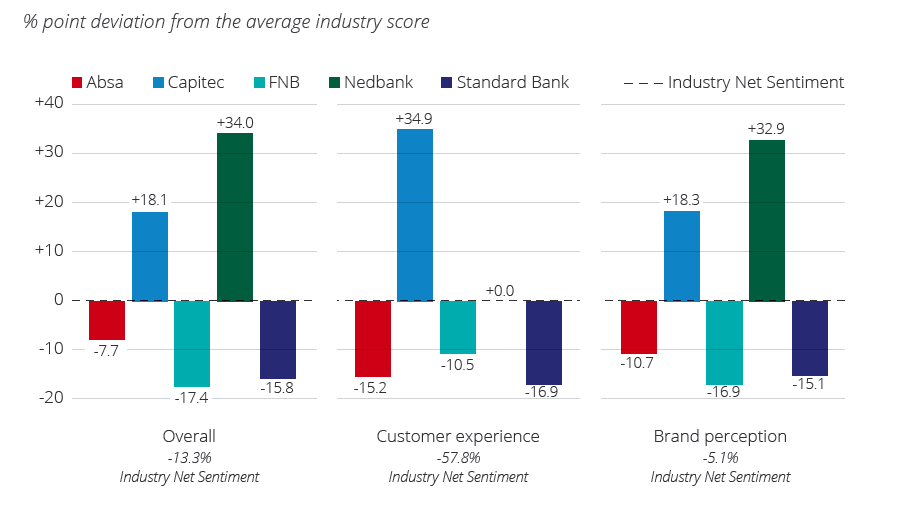 Capitec was most positively compared to other banks. Affordability remains the key point of positive comparisons. This was largely driven by the announcement that the bank would reduce its fees in 2019, which resonated with a price-sensitive consumer base. The introduction of cash sends ensured that withdrawals and deposits became a primarily positive point of comparison in 2019.

The response to Discovery Bank’s launch was underwhelming, this was driven by complaints about the launch delays and onboarding issues with existing Discovery clients. Discovery’s announcement in November 2018 that 10% of the bank’s shares will be given to black depositors was not welcomed by all consumers and drove a significant decline in sentiment. Tyme performed well with growing awareness and improving sentiment post-launch. Positive sentiment for Bank Zero was driven by engagement with the bank’s co-founder, Michael Jordaan.

Commenting on the arrival of new entrants, DataEQ SA chief executive, Nic Ray said, “The excitement that paved the way for their long-awaited arrival will likely be tempered by growing service requests and complaints as the banks onboard new customers. The key challenge will be maintaining a positive customer experience as they scale their customer base and switch on new products and services.” 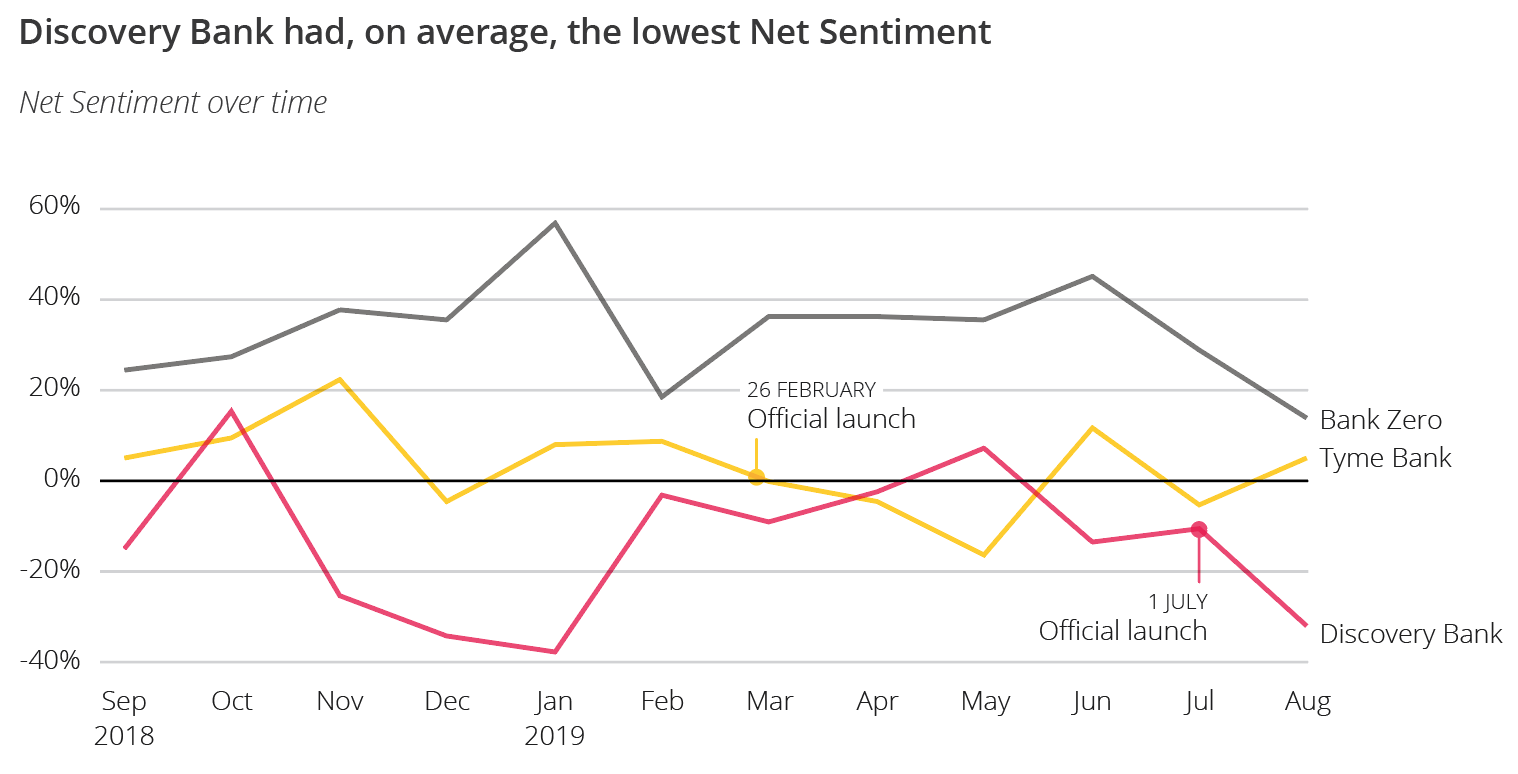 “South Africans are increasingly directing their complaints and service requests to the social handles of their banks as they seek to publicly out the bad service they have received or speak directly with their bank. Banks will need to introduce systems that allow them to find, prioritise and resolve the most important customer interactions from the rest of the noise on social media. Those that can adopt this approach stand to gain in loyalty and optimise retention. Those that do not can expect to see their clients switch banks.” said Ray.